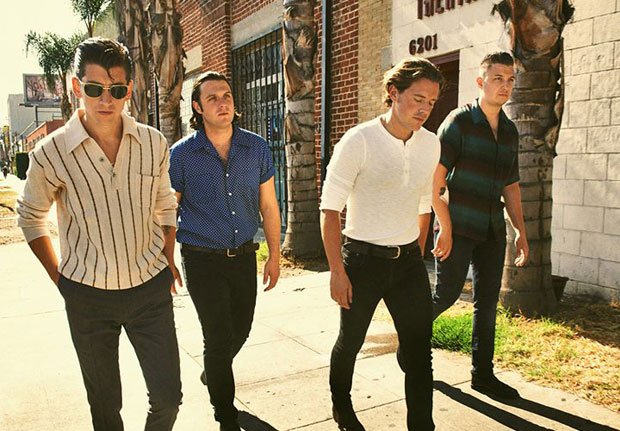 Arctic Monkeys are back in business with a new album on the way, festival appearances lined up for the summer and a massive UK tour, with tickets on sale at 9am on Fri 13 Apr.

Tranquility Base Hotel & Casino is released on Fri 11 May, and for now all you've got to go on is a tracklisting that suggests Alex Turner's embracing the sillier corners of his right brain this time out ('The World's First Ever Monster Truck Front Flip', 'Batphone', 'The Ultracheese') and a trailer video, the aesthetic blueprint of which is straight outta Garth Marenghi's Darkplace.

Ahead of the tour and the new record, we're casting our eye over the band's discography, picking our ten favourite songs to date.

'I Bet That You Look Good On The Dancefloor'

'Don't Believe The Hype', Alex Turner slurred at the top of the band's video for breakthrough single 'I Bet You Look Good On The Dance Floor. Nobody listened. The song went straight to the top of the charts, turning the band into the biggest guitar phenomenon since Oasis, causing thousands of teenagers to instantly form bands. The best bit? Drummer Matt Helders backing vocals (and cheeky wink to camera in the video). They'd arrived, and how.

Turner had a sense of humour from the get go, apparent from the band's first official single 'Fake Tales of San Francisco', taken from Five Minutes With Arctic Monkeys. A highly amusing takedown of posturing 'weekend rockstars', fully kitted out in cliched costume but with nothing to say, it saw Turner juxtapose the glitz and glamour of California and New York with the greater Sheffield area. Our heroes would soon find themselves in those places, showing that geography isn't a hinderance to world domination – but bad tunes are. And the other half that proclaims otherwise? 'The proof that love's not only blind but deaf'.

It'd be wrong to paint the band's early work as cynical though. 'A Certain Romance' is a wide-eyed homage to the band's home city, to the unbridled joy of being a teenager, on the cusp of adulthood, sensing freedom but quite possibly feeling claustrophobic too. There's a particularly poignant lyric about those troublesome mates, pals by proximity, who've landed you all in it once again: 'What can I say? I've known them for a long, long time… 'you just cannot get angry in the same way'.

How to follow up the fastest-selling debut album in the history of British music? How about bettering it, less than 18 months later. The band beefed up their sound for second album Favourite Worst Nightmare, with original bassist Andy Nicholson making way for Nick O'Malley. 'Teddy Picker' referenced the band's own meteoric rise and the media hype machine, professing indifference towards the people who would build them up only to knock them down.

Favourite Worst Nightmare was heavier than its predecessor, but more sensitive too, with Turner impressively expanding his lyrical horizons. Documenting a break up, 'Do Me A Favour' focuses on a precise moment: the painful conversation, the bitter exchange of words before the parting of ways, with the striking kiss off: 'To tear apart the ties that bind / perhaps fuck off might be too kind.'

The final track from the second album and a staple of the band's live set since it's release, often bringing things to a close, '505' still stands as one of the Arctic Monkeys' finest moments. Over an Ennio Morricone organ sample, Turner spins a tale about returning somewhere, to someone, with purpose. There's longing and conflict side by side ('I probably still adore you with your hands around my neck') and ultimately the sense of an ending ('I completely crumble when you cry / it seems like once again you've had to greet me with goodbye').

Humbug, recorded in the desert with the help of Josh Homme, saw the band move away from the tighter grooves of the first two albums, with a looser feel overall. It's undoubtedly a grower, with little in the way of immediate singles (after two albums full of them) but has stood the test of time. The album's standout track is its outlier, 'Cornerstone', a ballad about a character who approaches women who look like his ex. Conceptually hokey, but in execution it sounds anything but: a lovelorn doozy of song with meticulous attention to detail.

Suck It And See, the band's fourth album, delivered more straightforward pop songs than the divisive Humbug, but was still a lyrically playful, oblique collection, following off the back of Turner's Submarine soundtrack (from that collection, 'Stuck On A Puzzle' is one of the best songs he's ever written). 'Black Treacle', the record's fourth single, is the pick of the bunch. Full of surreal wordplay, there's a sickly sweet guitar hook that appears fleetingly twice, keeping you waiting for more.

Who'd have thought Arctic Monkeys would have made it this far? Hyped to the heavens, written about in godlike terms as teenagers, they've lasted the distance, making subtle sonic shifts from album to album. Following the back to basics approach of Suck It And See, AM was bolder, with its sonic reference points varying from Dr. Dre to Black Sabbath. The first taste came with the prealbum single 'R U Mine?', a runaway train of a track, driven by a classic blues riff and punctuated by some delightful falsetto backing vocals.

AM's centrepiece takes us back to the dancefloor where we began and a wistful ballad incongruous with its title, a portrayal of a would be lothario on the prowl rather than a tale of hedonistic partying.

Tickets for Arctic Monkeys go on general sale at 9am on Fri 13 Apr.

The stomping Sheffield tykes have graduated from songs about chip shops and taxi ranks, but the ferocious singalong favourites of old should also make an appearance.