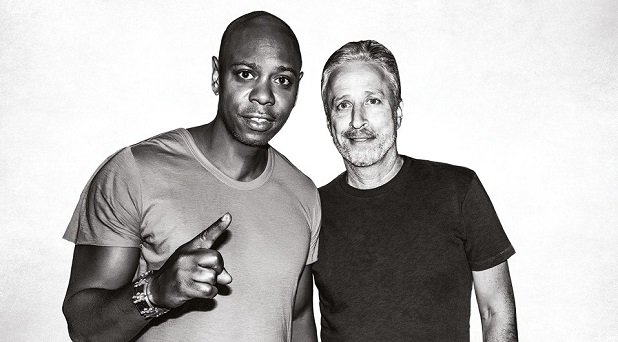 Join the comic duo for their first joint UK shows

Comedy juggernauts Dave Chappelle and Jon Stewart have announced two nights at London's Royal Albert Hall on Sun 21 Oct and Mon 22 Oct 2018. Tickets for the shows go on sale at 10am on Fri 17 Aug.

Dave Chappelle is considered one of the world's greatest stand ups who has appeared in several huge Hollywood blockbusters (including Robin Hood: Men in Tights, The Nutty Professor, Con Air and You've Got Mail) but is probably most famous for sketch comedy series Chappelle's Show. Joining the comedy heavyweight is Jon Stewart, the multi-talented comedian and writer who hosted satirical news program The Daily Show on Comedy Central, from 1999 to 2015.

The two comedians had previously united in August 2017, with Jon Stewart making a surprise appearance during Dave Chappelle's set at New York's Radio City Music Hall. Following the success of this show the two took to the road for a joint tour. Fresh off a sold-out string of shows in Boston, Houston, El Paso and Atlanta the duo are bringing their act to the UK for their first time.

Dave Chappelle and Jon Stewart take to the stage at London's Royal Albert Hall on Sun 21 Oct and Mon 22 Oct 2018. Tickets go on sale on 17 Aug at 10am

Comedy titans hit the road together.