KISS bring End of the Road world tour to UK, here's how to get tickets 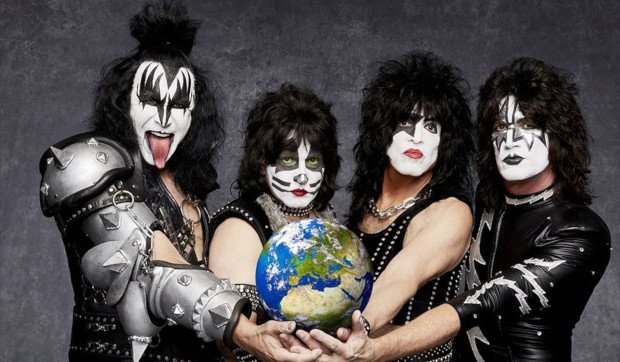 KISS have announced they will embark on the aptly named End of the Road global farewell tour in 2019. The four-piece will perform at five arena's across the UK in July 2019, marking their last ever UK shows. Though no presale is available, tickets for the shows go on sale at 10am on Fri 2 Nov.

The group have been a consistent presence on the rock landscape since the mid-to-late 70s when their elaborate appearance and energetic performances got them noticed. The group's live shows have included, fire breathing, pyrotechnics, levitating instruments, rockets and a whole host of other surprises.

Since their self-titled debut album came out in 1974 the band have put out a staggering 24 studio albums. It therefore comes as no surprise that KISS are one of the best-selling bands of all time, having sold more than 100 million records worldwide. Notable hits from the group include 'Detroit Rock City', 'Love Gun', 'Black Diamond', 'Deuce', 'Hard Luck Women' and more.

Despite embarking on a farewell tour in 2000 the band have declared this truly is the last goodbye. Speaking of the 2019 tour the group said: 'It will be the most explosive, biggest shows we've ever done. People who love us, come to see us. If you've never seen us, this is the time. This will be the show.'

The short string of shows kicks off on Tue 9 Jul at Birmingham Arena follow by a night at The O2 in London. The band will also perform in Manchester and Newcastle before a final show on Tue 16 Jul at The SSE Hydro in Glasgow.

Tickets KISS' UK shows are available from 10am on Fri 2 Nov.

The last ever tour from the monochrome-made up rock guys, fronted by Gene Simmons and Paul Stanley. The quartet have sold over 80 million albums worldwide since the band formed in New York in 1973 and were named by VH1 in their top ten list of the ‘100 Greatest Artists of Hard Rock’.