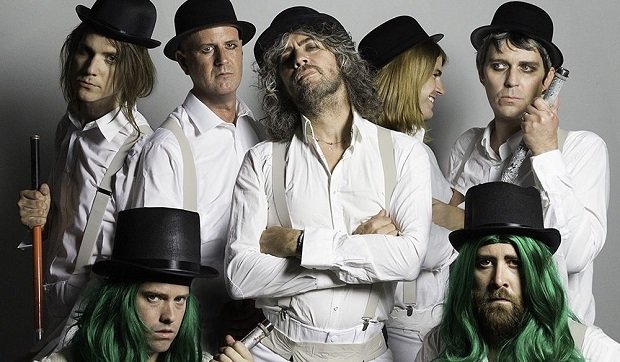 Band to play triumphant album The Soft Bulletin in its entirety

The Flaming Lips are set to play in Edinburgh, Manchester and London this September. The seven-piece are will perform their ninth studio album The Soft Bulletin in its entirety with orchestral accompaniment. Tickets go on sale at 10am on Fri 8 Mar.

The Soft Bulletin was released in 1999 and quickly achieved widespread acclaim. Critics hailed the 14-track record as a welcome departure from the bands previous guitar-heavy alt rock blare in favour of artfully layered and intricately arranged tracks.

The record made numerous 'Best of 1999' lists and was crowned NME's Album of the Year. The album is now considered to be the Flaming Lips' best masterpiece by fans and critics alike.

Hits like 'Race for the Prize', 'Waitin' for a Superman' and 'Suddenly Everything Has Changed' continue to induce chills thanks to Wayne's triumphant vocal melodies and the experimental tempos that defined the group's future sound.

The Flaming Lips originally teamed up with the Colorado Symphony to perform the album in 2016. This year they revived the show for a performance at the Boettcher Concert Hall in Denver. The UK dates date will give fans the rare opportunity to hear it live and loud for the first time in full.

Tickets for The Flaming Lips' The Soft Bulletin UK tour are available from 10am on Fri 8 Mar.

The Flaming Lips bring their cosmic eccentric live show, furry animals and fake blood back to the UK.