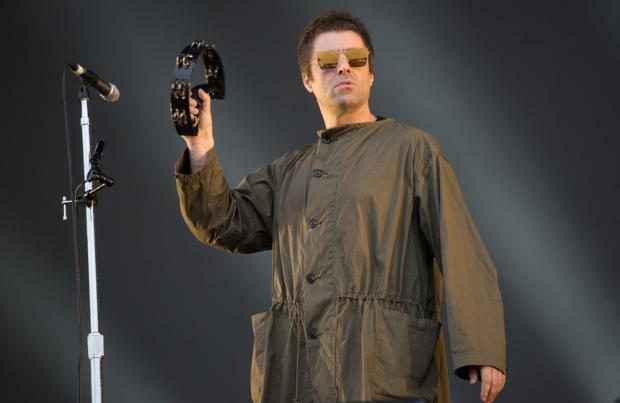 Liam Gallagher has seemingly named his new album 'Why Me? Why Not?' after the titles of two self-portraits drawn by his idol John Lennon

The former Oasis frontman announced the name of his second solo LP this week as 'Why Me? Why Not?' – the follow up to 2017 hit 'As You Were' – and the two phrases can be revealed to be a combination of the titles of two self-portraits drawn by the late Beatles legend.

"Why Me?" originally drawn by Lennon in 1978 and shows the 'Imagine' songwriter standing before himself asking his alter-self: "Why have I been so blessed? Why do I exist? Why have I chosen to act as a voice of reason asking people to live in peace and to love one another?"

Both phrases were used by John to state his belief that there are two types of people in the world – "why me? and why not?"

Liam has been a lifelong fan of John and his music and even named his eldest son Lennon – his child with ex-wife Patsy Kensit – after the iconic musician. He also sampled his voice on 2008 Oasis single 'I'm Outta Time' – which he penned for the band's final studio album 'Dig Out Your Soul'.

The 46-year-old singer previously stated he believes that John -who was tragically shot and killed outside his Manhattan apartment in The Dakota building in 1980 at the age of 40 – is his "spiritual guide" and has been "looking out" for him.

Speaking of John, the 'Wall of Glass' hitmaker said: "[He's my] spiritual f***ing guide. I do believe he's here. I do believe that he's looking out for me."

Liam was also invited by John's widow Yoko Ono to visit the New York home she had shared with the musician from 1973 until his tragic death.

Whilst there, the ex-Oasis star was fascinated by a banner written in Japanese that she had in her kitchen, and once Yoko had translated the words for him Liam wrote the saying down and he has included it in his song 'I've All I Need'.

Liam revealed: "There's a line in there (on 'I've All I Need') that says 'I hibernate and sing, while gathering my wings.' I was over in New York once and I got a call saying, 'Yoko wants to meet you', and I just called me kid Lennon. So anyway we go to Yoko's house in the Dakota building. Cut a long story short, we go in there and in the kitchen – she invites us in and makes us a cup of tea – and she's got this banner, massive banner round the kitchen, and I said, 'Oh what does that mean?' And she goes, 'Oh John asked the same question when we went to Japan to meet my parents.' Anyway it says 'while I've been hibernating, I've been gathering my wings', and it was when he stopped making music. So I thought, write that down. So anyway, years go by, I've been trying to get it in to a song, could never get it in, and then it happened on that."

Liam is set to drop his new single 'Shockwave' on June 7, the day after his new documentary film 'As It Was' is released in cinemas.