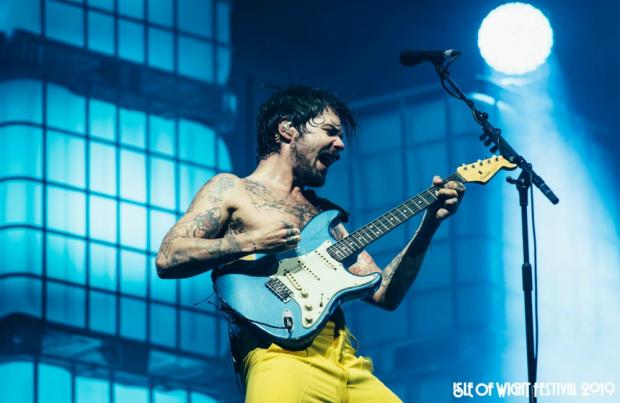 Biffy Clyro closed the Isle of Wight festival 2019 in style on Sunday (16.06.19) with an impressive firework display

Biffy Clyro closed the Isle of Wight festival 2019 in style on Sunday (16.06.19) with an impressive firework display.

The Scottish rockers – comprised of Simon Neil and brothers James and Ben Johnston – headlined the third and final day of the music extravaganza at Seaclose Park, Newport, and made sure it was a night no-one would forget as they wowed crowds with a lengthy firework display.

The impressive show took place during the group's final song, 2013's 'Stingin' Belle', and came after the trio had already stunned with show stopping displays of pyrotechnics and confetti throughout their almost two-hour set.

Biffy Clyro played for 10 minutes longer than expected after Jess Glynne pulled out of the festival at the last minute, citing "exhaustion" as the reason for her cancelled set.

The stage was set up for her performance when a festival organiser came on stage 10 minutes after her set was due to start to inform the crowd she would not be able to start her set.

Instead, both Biffy and Richard Ashcroft had their sets moved forward to fill the gap, but the former Verve frontman – who had the whole crowd singing along to classic hit 'Bitter Sweet Symphony' – chose not to extend his set any further.

Elsewhere in the festival's final day, Madness had crowds on their feet and dancing along to several hit tracks including 'Baggy Trousers', 'Our House', and 'It Must Be Love'.

Closing out the Big Top stage this year were Keane, who played to a packed tent, with audiences belting out the words to the likes of 'Somewhere Only We Know' and leaving frontman Tom Chaplin teary eyed.

'Living Is A Problem Because Everything Dies'

'Born on a Horse'