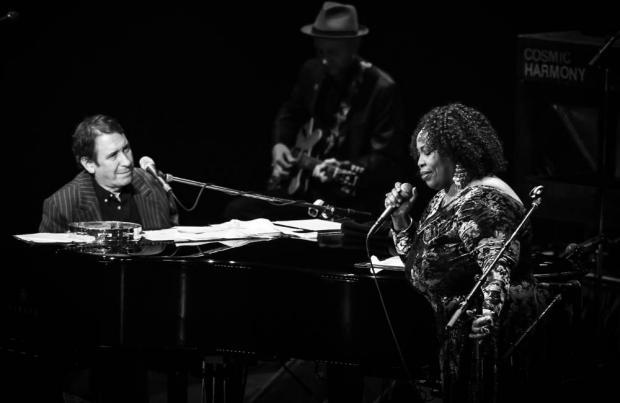 Jools Holland and Ruby Turner will release new gospel-inspired number 'Come On In' on Friday (11.10.19).

The Jazz musician and the British Jamaican R&B and soul singer – who have previously released two albums together, 2015's 'Jools & Ruby' and 2008's 'The Informer' – have teamed up on the new song, which is inspired by blues and soul legends BB King and Al Green.

Jools said: "Ruby's the greatest joy to work with.

"Whether we are on stage, in the studio, writing at home or running things backstage, we're always in the same place – which is completely connected musically.

"Lyrically this song captures the beauty, kindness and humanity of Ruby Turner."

Ruby – who has been a session backing vocalist for Jools, Sir Mick Jagger, UB40 and Bryan Ferry over the years – revealed that due to Jools' "manic" schedule, it took him two years to finally get around to adding his piano parts.

She added: "When I wrote this song I was inspired by the wonderful BB King and Al Green, their commitment to music and love of gospel, blues and soul.

"It gave me such peace and a strong sense of fellowship and gathering together.

"I proposed it to Jools but his schedule is always so manic that it took him nearly two years to get to it.

"I sang it down the phone to him and he wrote the music, changed the chorus, switched the bridge and structured it.

"We then tried it out live, with no rehearsal, at one of his biggest shows we played that year..."

Meanwhile, the pair – who have worked together since the 90s – head out on an extensive autumn/winter tour, kicking off on October 24 at Southend Cliffs Pavilion in Essex, and wrapping at Manchester O2 Apollo on December 22.

'Come On In' will be available on all major streaming platforms.