Cher receives award for playing The O2 for the first time 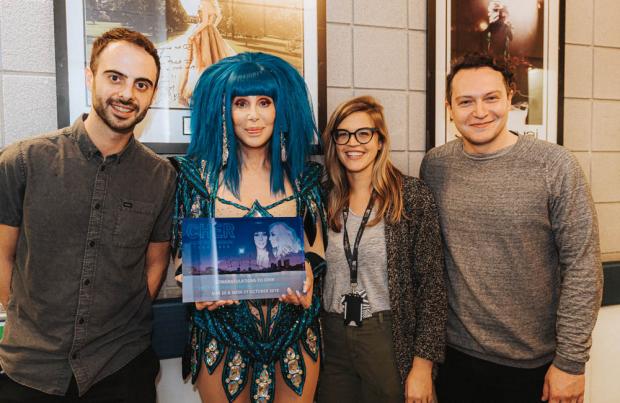 Cher collects award from The O2

Cher has been honoured with an award for making her debut at The O2 arena in London.

The music legend – who hadn't played this side of the pond since the 'Living Proof: The Farewell Tour' in 2004 – treated fans to a show-stopping performance of all of her greatest hits and her ABBA renditions from her covers LP 'Dancing Queen', which was released last September, following her acclaimed appearance as Ruby Sheridan in the blockbuster movie 'Mamma Mia! Here We Go Again'.

Christian D'Acuna, Head of Programming, The O2 said: "It was an honour to host the first Cher show in London since 2004, when The O2 wasn't even in existence and it was well worth the wait!

"What a show, full of 50 years' worth of hits, uncountable costume changes, multiple wigs and fascinating anecdotes.

"We hope she doesn't leave it so long to return next time.

"Thank you to Marshall Arts for promoting the tour and of course to Cher, for an incredible couple of nights at The O2."

Ahead of the shows it was reported that Cher had asked for a room just for her many wigs and costumes she wears throughout her set.

It was also claimed that she asked to have her water specifically served at 23.5 degrees centigrade and she also requested plenty more treats including champagne and chocolate.

A source said: "What Cher wants, she gets. The venues and caterers have been asked to provide white and milk chocolate fountains, a slush machine and mountains of sugar-free Red Bull and cans of Coca-Cola.

"She has also ordered fruit platters and water, which must be 23.5C. Air con can be harsh on her voice so Cher wants it kept to a minimum. She also likes the backstage area to be relaxing and calming before she goes on stage. She has to get into the zone."

The mononymous singer and actress.