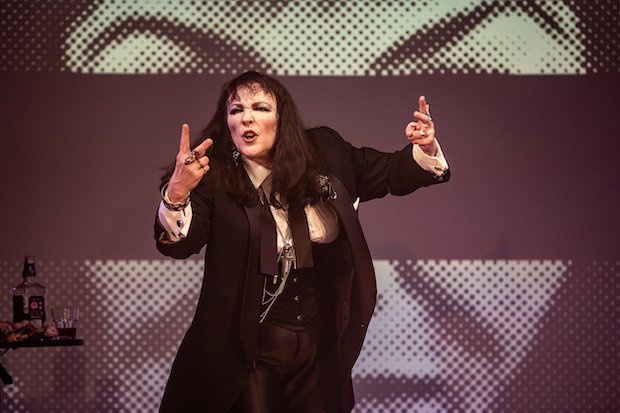 credit: The Other Richard

Direct from its Edinburgh Festival and sold-out London run Musik returns to Leicester Square Theatre in 2020. Presale tickets are available at 10am on Tue 29 Oct ahead of general sale.

The show features Pet Shop Boys songs that fans know and love as well as four songs made exclusively for the production by the duo, Neil Tennant and Chris Lowe. Writer Jonathan Harvey and Pet Shop Boys premiered the show at the 2019 Edinburgh Fringe.

Frances Barber is a multi-award winning actor known for her roles in Camille, Dead Fish, Doctor Who and more. She plays the iconic rock star and screen goddess Billie Trix once more following the show's critically acclaimed debut run in Edinburgh this summer.

The show brings to life Billie's excessive past – her journey from post-war Berlin to the rock arenas of the world. From the Vietnam war to Andy Warhol's Factory Billie Trix tells it all.

Musik runs at Leicester Square Theatre in 2020. Presale tickets are available at 10am on Tue 29 Sep via See Tickets.

**DIRECT FROM SELL-OUT RUNS AT THE EDINBURGH FESTIVAL font-size: small;">Billie Trix. Icon. Rock star. Screen goddess. Drug addict. Billie has lived a life of excess and shares it all in her new one-woman show. Her journey takes us from post-war Berlin to the rock arenas of the world, via the Vietnam war, Andy Warhol’s…

Leicester Square Theatre's history includes a late-70s Small Faces residency, appearances from the Rolling Stones and the Who, as well as being the venue where The Clash previewed their London Calling material. However, since re-opening in 2008, the…