Hollywood Vampires announce four-date UK arena tour, find out how to get tickets 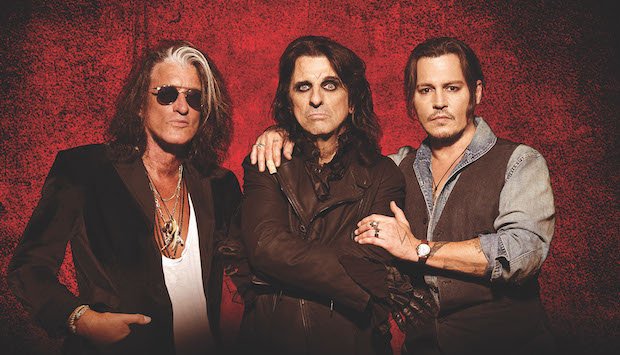 Hollywood Vampires have announced they will tour the UK in September 2020. Tickets for all shows are available at 10am on Fri 29 Nov.

The all-star supergroup consists of Alice Cooper, Johnny Depp and Joe Perry, with fluctuating members from all corners of rock and roll also joining them. The group formed back in 2015 in hopes of celebrating and showcasing the works of the rock stars who died from excess in the 1970s.

Since forming, the band has released two studio albums, featuring guest appearances by Paul McCartney, Dave Grohl, Joe Walsh and Christopher Lee among others. Their second album Rise was released earlier this year and shot to No. 1 on the UK Rock & Metal Album Charts.

The trio bring their 2020 tour to the UK following shows in Berlin, Hamburg, Milan and more. Catch the rock icons live and loud from Wed 2 Sep with support for Primal Scream.

Tickets for Hollywood Vampires 2020 UK tour are available at 10am on Fri 29 Nov.

American rock supergroup formed in 2015 by Alice Cooper, Johnny Depp, and Joe Perry to honour the music of the rock stars who died from excess in the 1970s.