Guns N' Roses announce Glasgow and London shows, find out how to get tickets 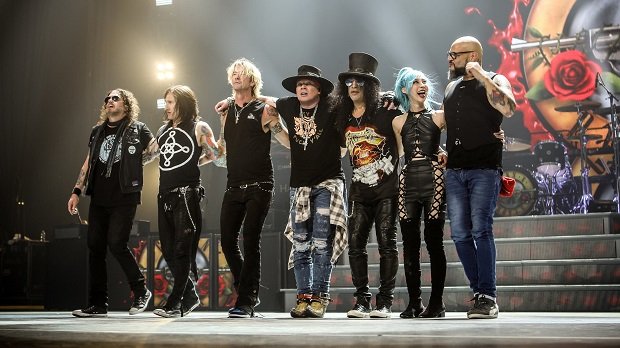 Axel, Slash, Duff and the band bring their latest tour to the UK this May and June

Guns N' Roses have announced they will perform in London and Glasgow in May and June as part of their huge European tour. Tickets for the shows go on sale at 9am on Fri 31 Jan.

The legendary rockers formed back in 1985 and two years later released their epic debut record Appetite For Destruction. To this day, the group – made up of current members Axl Rose, Duff McKagan, Slash, Dizzy Reed, Richard Fortus, Frank Ferrer and Melissa Reese – continue to rock the world, touring extensively from country to country.

The band are known for classic tracks like 'Welcome to the Jungle', 'Sweet Child O' Mine' and 'Paradise City'. Across six albums over three and half decades, the band have performed to around 5.5 million fans worldwide. In 2020 the group will do it all over again, with two nights at Tottenham Hotspur Stadium followed by their biggest ever Scottish show on Glasgow Green.

Axl and his band of hired hands play bombastic metal classics of the calibre of 'Welcome to the Jungle', 'November Rain' and 'Paradise City'.