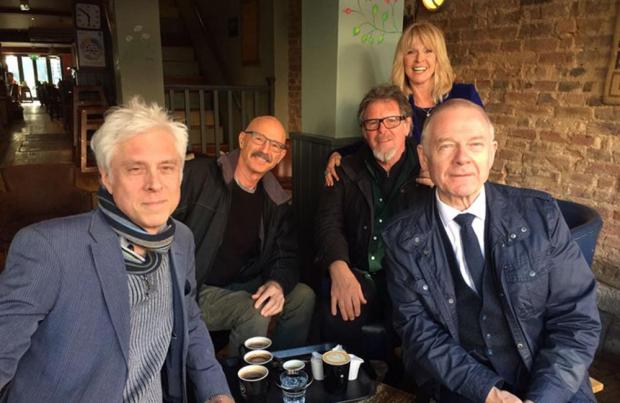 King Crimson's Bill Rieflin has passed away at the age of 59, after losing his lengthy battle with cancer

The gifted multi-instrumentalist – who started out as a drummer in the band before becoming their keyboardist – sadly passed away at the age of 59, following a long battle with cancer.

Frontman Robert Fripp announced the news on his Facebook profile and said himself and his wife Toyah Wilcox – who Bill worked with on her project The Humans – received a phone call from the late star's wife Tracy from their home in Seattle to let them know he had sadly lost his fight with the disease.

In a touching tribute, the 73-year-old musician said his life was made "immeasurably richer" for knowing Bill.

He wrote: "RF: A call from Tracy Rieflin in Seattle. Bill Rieflin flew from this world c. 18.50 Pacific, 18.50 UK. Tracy told Toyah and me that the day was grey, and as Bill flew away the clouds opened, and the skies were blue for about fifteen minutes. Fly well, Brother Bill! My life is immeasurably richer for knowing you. (sic)"

As well as King Crimson, Bill had most recently played with R.E.M and Ministry, whilst in the 90s he worked for the late Chris Cornell, Nine Inch Nails, and many more.

In 2012, the versatile musician played drums on Robbie Williams' LP 'Take The Crown'.

Tributes have flooded in for Bill – who worked with a number of industrial groups in the 90s.

Toyah said: "Our dear wonderful Bill Rieflin flew from this world today. Much loved HUMAN and member of King Crimson. Family by his side. Forever in our hearts. #billrieflin (sic)"

Ministry – who he began drumming for in 1986 – tweeted: "Today we lost a wonderful artist, tremendous human being and an integral part of Ministry's developments and success...

"Safe travels my brother on the way to your next universal gig.

Nirvana's Krist Novoselic wrote: "So sorry to hear of Bill Rieflin passing away. A straight up person and excellent musician."

Bill began his career in Seattle playing with The Telepaths and The Blackouts in the 70s.

He first came to work with Ministry's Al Jourgensen in the Revolting Cocks, before joining Ministry, and he featured on some of the greatest records, including 'The Mind Is A Terrible Thing To Taste' and 'Psalm 69: The Way to Succeed and the Way to Suck Eggs'.

The talented star became a member of R.E.M. in 2003 until 2011, playing drums and occasionally guitar and keyboards.

He featured on their albums 'Around The Sun', 'Accelerate', and 'Collapse Into Now'.

The rock band's frontman Michael Stipe has penned a touching Eulogy to honour his legacy and life on R.E.M.'s website.

In 2013, Robert unveiled Bill as one of three drummers for progressive rock group King Crimson, he later became their first full-time keyboardist, before going on an indefinite break in 2019.

He still kept his toe in industrial rock though, and worked with Swans on 2016's 'The Glowing Man'.