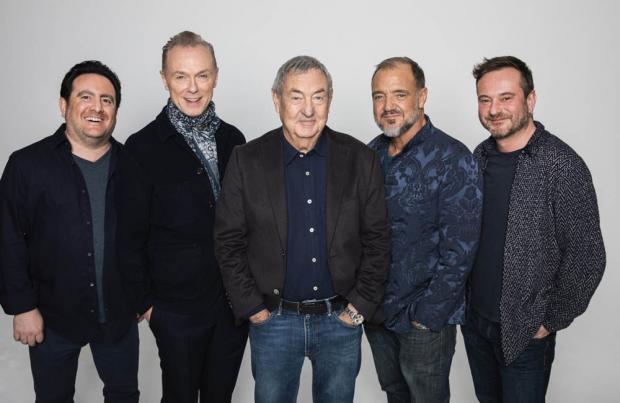 Nick Mason says his new band his Saucerful of Secrets will not release new material.

The Pink Floyd drummer is part of the group with Spandau Ballet's Gary Kemp, long-time Floyd collaborator Guy Pratt, Lee Harris and Dom Beken and at their concerts they perform tracks from the start of the legendary prog rock group's career such as songs from 'A Saucerful of Secrets' and 'The Piper at the Gates of Dawn', which featured the group's late singer-and-guitarist and co-founder Syd Barrett.

In September, the band's album 'Live at the Roundhouse' will be released which is comprised of 22 songs recorded over two gigs in May 2019 at The Roundhouse in Camden Town, London, a venue where Pink Floyd and the Soft Machine played a famous 1966 gig.

Although Nick is excited for people to here their versions of the tracks he is adamant the five-piece will not be writing any new songs together.

Speaking to Goldmine magazine, he said: "There's the live album, and I don't think we'll do too many of those. We don't have a long-term vision of how this should work – we knew there'd be at least a year of doing exactly what we're doing now, augmenting the set list with new material, but there's no plan that we're going to invade other catalogues or start writing new material or whatever.

"But having said that, we're open to suggestions. If you told me that I'd be hammering around the country playing old Pink Floyd stuff 10 years ago, I'd have thought I'd gone mad."

In May, Nick Mason's Saucerful of Secrets announced a host of rescheduled European tour dates for 2021.

They were due to hit the road for the European leg of the run on May 18 in Brussels, Belgium, but due to the coronavirus pandemic and the continued restrictions of mass gatherings and closure of venues, they will now begin the jaunt on May 21, 2021, in Hamburg, Germany.