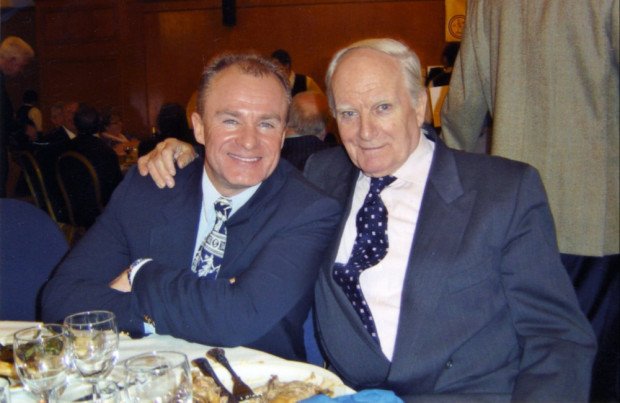 The 62-year-old actor and comedian has taken to social media to pay tribute to his "best friend and hero" Bill Nankeville, who passed away on Friday (08.01.21) at the age of 95.

Sharing a picture of him and his father, he wrote on Twitter: "Today I lost my best friend and my hero.The most wonderful human being I have ever known. I'm so proud of him. He was GB mile champion and represented his country in two Olympic games but to me he was just "Dad".

"I will miss him so very much and I will love him forever ... Whenever I was with him and he was introduced to anyone as, 'This is Bill Nankeville he's Bobby Davro's father'. I was always proud to say 'No ... I'm Bobby Davro and I'm Bill Nankeville's son!' Sleep well dad. I love you to the moon and back x (sic)"

And social media was flooded with tributes for Bill, who was a national champion mile runner.

To which Bobby replied: "He was indeed Piers and thank you for your lovely message x (sic)"

James Whale shared: "So sorry to hear that my friend I’m thinking of you XX (sic)"

And his fans also paid tribute to the late athlete.

One wrote: "So sad for your loss, Bill was a great man in so many ways who was so proud of you – still remember him crying when you sat on the stage and sang ‘wind beneath my wings’ to him (sic)"

Whilst another added: "So sad to hear that Bill has passed away I knew him for over 30 years as

@BobbyDavro1 would bring him to games both at White Hart Lane and Wembley inc the ‘91 FA Cup Final. He was so proud of Bobby. He was also an athlete in the ‘50’s who ran with Roger Bannister. (sic)"