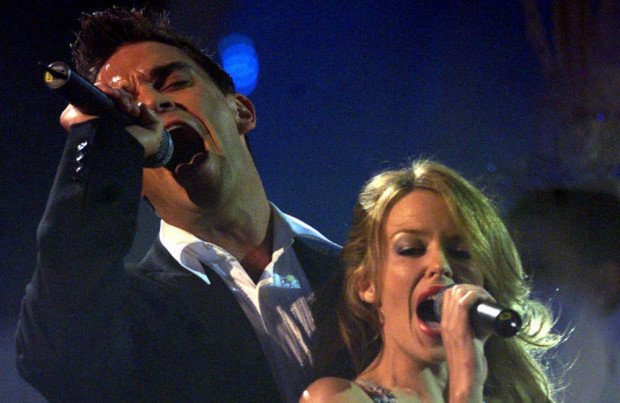 Robbie Williams and Kylie Minogue in 2000

Robbie Williams has teased a new duet with Kylie Minogue.

The 'Angels' hitmaker and the Australian pop princess previously teamed up on 2000's 'Kids', which narrowly missed out on the number one spot in UK chart to U2's 'Beautiful Day'.

And now, the 46-year-old former Take That star has revealed he and the 52-year-old 'Golden' singer have "big plans" for a follow-up.

While an insider told the tabloid: "Kylie and Robbie have recorded a new song together.

"It's their first collab since 'Kids' in 2000 and Robbie is keen to make it a single.

"Due to Covid there are no concrete plans for the release.

"It won't be a mini drop like Kylie recently did with her Studio 2054 remix of 'Real Groove' with Dua Lipa."

Robbie previously admitted his new record will have a "disco feel to it", after he was inspired to pen party music after re-listening to Kylie's 2001 track 'Your Disco Needs You', which he co-wrote.

He said: "I’ve got to say, as I look down the list of my new songs from my new album, that I don’t know when it’s coming out.

Last year, Kylie and Robbie both featured on the Children in Need charity cover of Oasis hit 'Stop Crying Your Heart Out’.