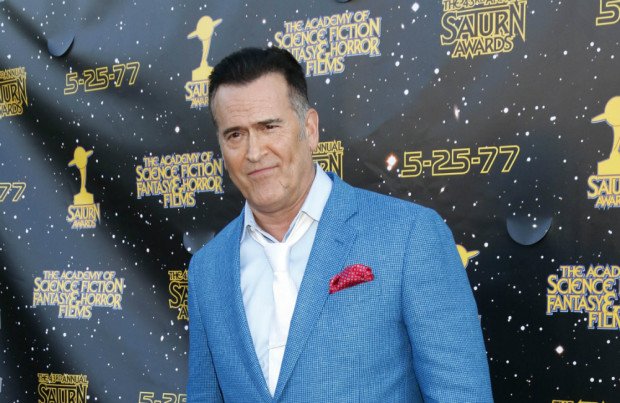 The 62-year-old actor – who made his name portraying Ash Williams in the original 1981 supernatural horror movie 'The Evil Dead' and its 1987 sequel – is serving as a producer on the upcoming movie and opened up on plans to shoot in New Zealand.

He told Knox News he is planning to shoot the next 'Evil Dead' movie in New Zealand later this year, which will be set in a modern-day urban setting.

He added: "It’s out of the woods. That's the best thing to say."

He previously revealed the film – which is going to be written and directed by Lee Cronin – will feature a new heroine as the lead character, replacing Jane Levy's Mia from 2013 movie 'Evil Dead'.

He explained: "We’re going to have a heroine, a woman in charge, and she’s going to try and save her family… We’re honing-in, circling the building now trying to lock in a partner. We have a couple of bidders and we’re trying to just find the correct suitor...

"Look, this is another ‘Evil Dead’ movie and that book gets around, a lot of people run into it and it’s another story.

"The main key with 'Evil Dead' is they’re just regular people who are battling what seems to be a very unstoppable evil, and so that’s where the horror comes from.

He said: "I'm done with Ash. I've done everything that I know how to do. And it's OK to let those characters go, because when it's time to get the walker out, and the cane, forget it! Get out before that happens, not after."

Ash was left in a post-apocalyptic future in his last appearance, which came in the 2018 television series 'Ash vs Evil Dead', and Campbell believes he will still be saving the world.

When asked what his character would be up to now, he said: "Saving the world, in the future. Then he's fulfilled the prophecy of defeating evil in the past, present and future.

"And then you kill him, that's the comic book way. Then you pass the mantle to some hot chick!"