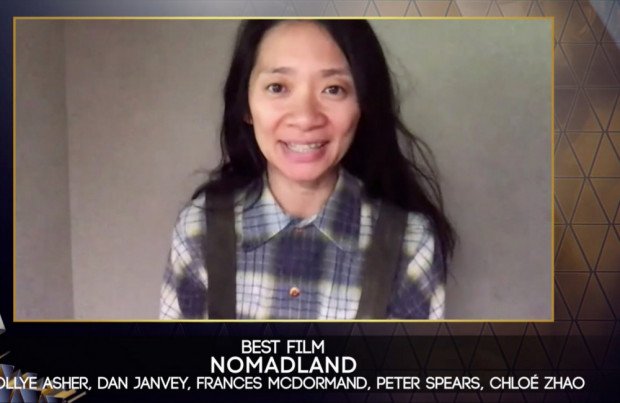 The drama movie's director picked up four gongs at the virtual ceremony on Sunday night (11.04.21) as well as Best Director for Zhao and Best Leading Actress for Frances McDornand for her role as Fern in the hit movie.

Accepting the Best Film award, Chloe said: "Thank you BAFTA again, thank you so much. We would like to dedicate this award to the nomadic community, who so generously welcomed us into their lives. They shared with us their dreams, their struggles and their deep sense of dignity. Thank you for showing us that ageing is a beautiful part of life, a journey we should all cherish and celebrate. How we treat our elders shows us a lot about how we are as a society and we need to do better. Thank you again members of BAFTA and we hope to see you again down the road."

Unable to make the ceremony, a statement was read out on her behalf: "Thank you dear British people. I humbly accept this honour on behalf of the 'Nomadland' tribe and company. We salute you. Long may we roam."

Joshua James Richards also picked up Best Cinematography for his part in the movie.

An abridged list of winners at the EE BAFTA Film Awards 2021 are as follows:

Best Film Not In The English Language – 'Another Round'

Outstanding Debut By A British Writer, Director or Producer – 'His House', Remi Weeks

Chloé Zhao's Oscar-winning drama starring Frances McDormand, which follows a women who begins living as a modern day nomad across western United States after losing her job in the Great Recession.