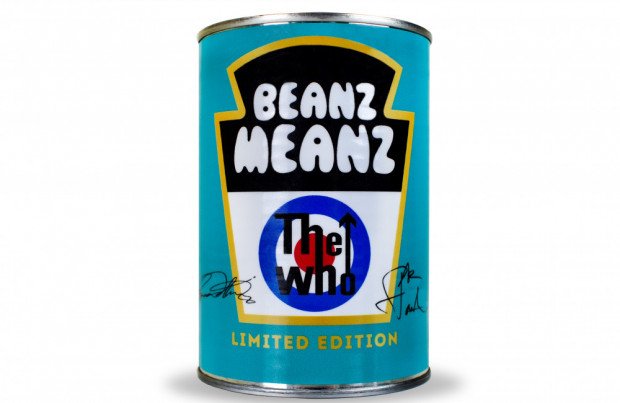 The Who's Heinz cans

The Who have reunited with Heinz five decades after their iconic 'The Who Sell Out' album artwork, which featured frontman Roger Daltrey sitting in a bath full of Heinz Beanz.

Daltrey, 77, and guitarist Pete Townshend, 75 – the surviving members of the legendary rock band – are set to launch limited-edition 'Beanz Meanz The Who' cans to mark the release of the new expanded edition of the 1967 LP and raise funds for Teen Cancer America in the US, and child hunger charity Magic Breakfast and the Teenage Cancer Trust in the UK.

What's more, a signed giant replica of the limited-edition can is set to go under the hammer via givergy.uk/HeinzTheWho this Thursday (15.04.21) to Sunday, April 25.

Daltrey has recalled how he was in bed with flu-like symptoms for a week after shooting the cover.

He remembered: "[Afterwards] I ended up with a week in bed with either the flu or probably the worst cold that I've had in my lifetime and I put it down to the baked beans because they'd just come out of the fridge; they were freezing cold! I sat in them for twenty minutes until they had the great idea of putting electric fire round the back of the bathtub I was sitting in, which worked for a while. It started to heat them up, but then they started to cook. So my arse was roasting while my front was freezing and within 24 hours, I was in bed with the sniffles. I don't blame the beans; I blame the electric fire!"

However, it didn't put the 'My Generation' rocker, who admits he can't cook, off the tinned food, as he hailed beans a "magical breakfast".

He added: "I don't know anybody who doesn't like Heinz Beanz, they're great. They're so simple; you put your eggs on, you put your toast on, you click your toaster, you time your eggs, and you put the beans in a pan, and it all comes together all in one lump. It's great. For someone who can't cook like me, it's the most magical breakfast you can have: poached eggs and beans on toast."

Lucy Cooke, brand manager, Heinz Beanz said: "We are very excited to be working with The Who, celebrating the iconicity of both our brands, as they release the expanded edition of the 1967 album 'The Who Sell Out'. 1967 was obviously a great time for creativity, as our famous advertising slogan 'Beanz Meanz Heinz' launched that very same year and went on to be voted the U.K.'s favorite of all time.

"We've had lots of fun working on this collaboration, and to be able to raise funds for our brilliant charity partners with our limited-edition 'Beanz Meanz The Who' cans is just wonderful."

Jane Ashton, head of entertainment, Teenage Cancer Trust, said: "We're thrilled that The Who and Heinz have teamed up to fundraise for teenagers and young people with cancer.

"The money raised for Teenage Cancer Trust will fund our specialist nurses and support teams who work tirelessly to get young people with cancer through the hardest times of their lives."

Emily Wilkie, head of fundraising, Magic Breakfast, commented: "We're very excited that Heinz and The Who are using this brilliant initiative to raise vital funds for children and young people via Magic Breakfast and Teenage Cancer Trust. The funds Magic Breakfast receive will help us work towards ending child morning hunger in the U.K. and allow us to continue providing healthy breakfasts each school day to pupils in over 1,000 schools in disadvantaged areas each school day. A huge thank you to both Heinz and The Who!"

Heinz previously teamed up with Ed Sheeran on his own Heinz Ketchup bottles to raise funds for charity.

Head to heinztohome.co.uk/collections/beanz-meanz-the-who to get your hands on a limited-edition can now.