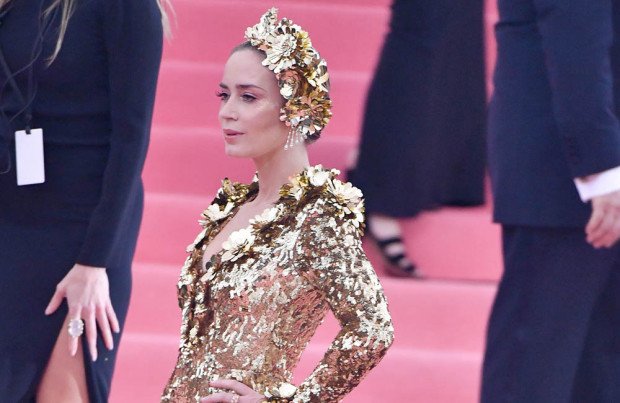 The trio formed a close bond when they worked together on 'Jungle Cruise' and the 38-year-old actress felt sorry for director Jaume Collet-Serra because he often had to scold them for messing around, but she admitted one of her favourite things to do was to team up with her on-screen sibling to send funny clips to their co-star urging him to work out less.

She admitted to You magazine: "Jack and I liked sending Dwayne videos of ourselves on set doing stunts, pretending that we were helping him learn how to do an action sequence.

"We’d send these really patronising videos of us being like, 'OK, Dwayne, this is called… a stunt sequence.'

"Jack’s name for me was 'Stunty Blunty'. He was 'Jacktion Man'.

"Our preparations for stunts involved eating a fried chicken takeaway. Every time we had an action sequence, that’s what we’d eat.

"So we’d send Dwayne videos saying, 'You don’t need to go to the gym so much, you actually just need to eat fried chicken.' "

While the former WWE star usually does his own stunts, Emily admitted she couldn't do as much as she used to after hurting her knees while making 'A Quiet Place Part II', which was directed by her husband, John Kraskinski.

She said: "There’s so much running in that film! Cillian [Murphy] and I would laugh about that a lot. I’m running from a creature constantly. And I haven’t got any shoes on!

"I remember running barefoot on the most uneven terrain with a baby in a box, and carrying things like oxygen tanks, and John going, 'Em, can you do a fake stumble?' And I did and botched up my knee. I had one good knee. Now I have two s*** knees.

"At the time I remember saying, 'Um, John, this ground is a bit uneven.' "