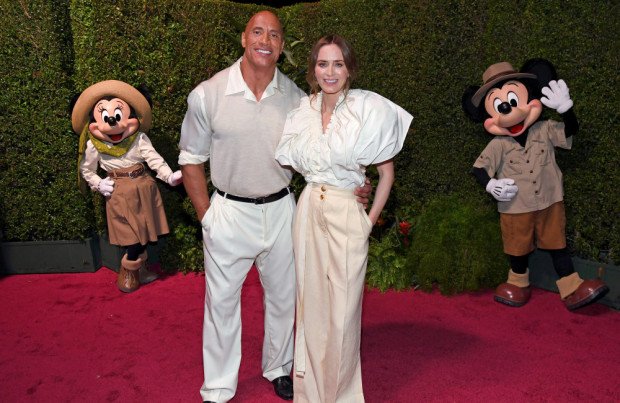 Dwayne 'The Rock' Johnson sent Emily Blunt a video begging her to be in 'Jungle Cruise'.

The wrestler turned actor was keen for the 38-year-old actress to be in the movie, but when he sent her a video asking if she would like to join the cast, she "ghosted" him and left him without a reply.

He explained: "When the script came to me, I loved it... [the role] was always for Emily Blunt. It was always Emily Blunt, that is the truth. She knows it ... I sent this video. I worked all night, I came home, it was like three in the morning. I was like, 'Okay let me make this video for Emily just telling her what a big fan I am and I would love for her to come onto the movie.'"

And when Emily asked him what he heard back after sending the video, he admitted she had "ghosted" him, adding: "'Nothing! Absolutely nothing! Ghosted me!"

Emily joked it was because he was too enthusiastic.

Revealing she didn't reply back to him straight away, she said: "It's almost like when someone comes at you with too much enthusiasm you have to shut them down a little bit!"

Before adding: "It was the most touching video in the world."

Emily previously opened up about how she loved the "warm and joyful" tone of the movie and was pleased to play such a strong character, describing Lily as "tenacious".

She said: "It’s so warm and joyful. I think we all felt nostalgic about making it. Lily is so tenacious and exciting, determined, completely free-spirited and kind of weird – a really interesting character. She’s not the damsel in distress that you’d expect in this genre."