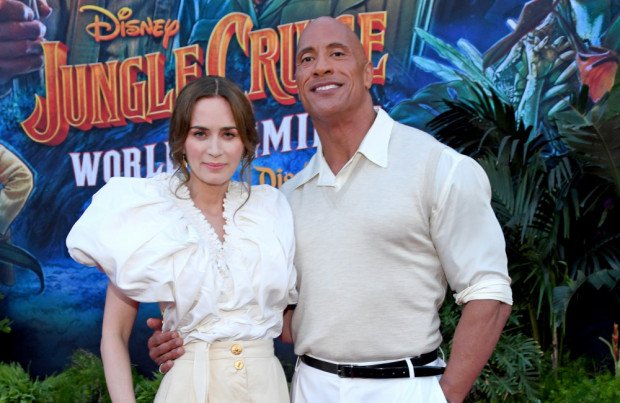 'Jungle Cruise' 2 is official with original cast members, including Dwayne Johnson, Emily Blunt and Jack Whitehall, set to return for more fun on the river

Disney has confirmed to The Hollywood Reporter that the trio will be back as Frank Wolff, Dr. Lily Houghton and MacGregor Houghton, respectively, after the success of the first film.

Director Jaume Collet-Serra is also set to helm the sequel to the movie franchise inspired by the theme park attraction of the same name, which grossed an impressive $100 million at the domestic box office.

"Mahalo to our buddy @Borys_Kit for breaking the big Jungle Cruise sequel news!!!

"This is going to be FUN!

"Jungle Cruise 2: Jolly up the Thames.

Dwayne recently admitted he had “goosebumps” when he stepped onto the ‘Jungle Cruise’ set for the first time.

The Disney blockbuster was shot on the Hawaiian island of Kauai and though the actor expected the set to be “spectacular”, he was stunned by just how impressive the replica Brazilian port town – which included a hotel, tavern, docks and market – that had been purpose-built for the project looked.

He said: “Before filming, we heard that the set was spectacular as they were building it. But when we finally stepped on set together, we were blown away – we had goosebumps.”

Meanwhile, Jack's mum thinks she should have had a part in the flick.

The 33-year-old star enlisted Hilary Whitehall's help when preparing for his audition and she joked she did so well at reading the lines spoken by Dwayne's character Captain Skipper, she should have been cast too.

She said: "When Jack got the audition he made me come over and practice lines with him in the kitchen. I read The Rock’s part brilliantly if I say so myself, and quite frankly I should have a part in the movie too!”

Jack previously claimed he based his "upper-class gentleman" character on his dad and Michael thinks MacGregor owes his sense of style to him.

Asked what he thinks about being an inspiration, Michael exclusively told BANG Showbiz: "At least it guided his wardrobe choices in the right direction.

"[Jack's own style is] variable. I often think he wears his trousers too short."