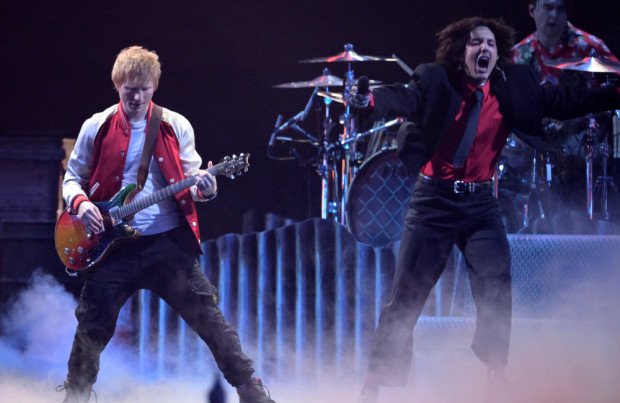 Ed Sheeran is planning a heavy metal project with Bring Me The Horizon.

The 'Bad Habits' singer teamed up with the 'Drown' rockers on a heavy version of his hit single at the BRIT Awards on Tuesday (08.02.22) and he has revealed there's more to come.

He told the Daily Star newspaper's Wired column: "We're going to write a song together... Playing with Bring Me The Horizon was a dream.

"I got in touch with [singer Oli Sykes] and we were going to write together but then the pandemic happened, so we were in touch – I've been a fan for a long time.

"Oddly enough that's the kind of music I grew up listening to and had a Kerrang subscription and I listened to it constantly."

The 30-year-old star joked his song would sound like a "wet fart" if he played it live as a solo track, and Bring Me The Horizon convinced him that their version would work well.

He quipped: "I actually said 'Bad Habits' would be a bit of a wet fart if I was just going up there and playing it normally.

"The song is EDM and they've taken it and make it a whole new thing. I was just like, you know what, these guitars are going to be great.

"It was a week's turnaround – we emailed each other two weeks ago, recorded it a week ago and rehearsed it three days ago."

Ed has been open to the idea of taking on a heavier style one day, after growing up listening to the likes of Cradle of Filth and Slipknot.

Last year, Dani Filth revealed he's been in touch with Ed after a social media exchange, and would love for them to record a song together for charity.

He said: “I’ve actually been emailing with him. He actually touched base with me. I’ve been invited up to his place.

"Well, he said he could come down to mine, but I pointed out to him that I don’t own my own bar or village, and it’d be better if I went there.

"He said he’d do anything. Quite literally. He said he’s a massive fan. He seems like a genuinely very nice guy actually.”