Tickets for Travis' headline show at True North Festival 2022 go on sale at 9.30am today 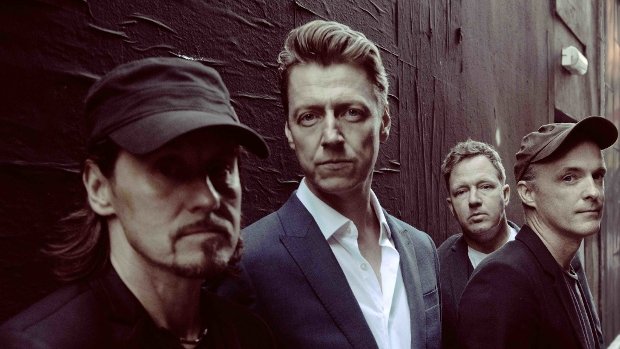 Rock band Travis have been confirmed as headliners for Aberdeen's 2022 True North Music Festival. Tickets go on sale at 9.30am today.

Performing their iconic 2022 album The Invisible Band which includes the singles 'Sing', 'Side' and 'Closer', the quartet will hit Aberdeen's Music Hall on Saturday 24 September. They'll also treat fans to their other well-known tracks such as 'Why Does It Always Rain On Me?'

The Brit winners are also set to tour the UK this month to mark the 20th anniversary of the celebrated album with Princes Street Gardens in Edinburgh and the Millennium Forum in Derry on the agenda. See a full list of tour dates and venues below. Tickets for these shows are on sale now.

The True North Music Festival will run from Thursday 22 to Saturday 25 September this year for its eighth year and will host acts such as Nitin Sawhney, Django Django, Gentle Sinner, Mica Paris and more.

Tickets for Travis go on sale at 9.30am today.

AiiTee is a talented up and coming singer/songwriter based in Scotland. Originally from Nigeria, AiiTee’s style is a unique blend of Afrobeat, Soul, Gospel and R&B. She started releasing music at the start of 2020 and has seen her music grow from strength to strength. She released her debut EP “Love Don’t Fall” in the…

Django Django are a British art rock band based in London, England. The quartet of David Maclean (drummer and producer), Vincent Neff (singer and guitarist), Jimmy Dixon (bassist) and Tommy Grace (synthesizer operator) met at Edinburgh College of Art, and formed Django Django in London in 2009.

Gentle Sinners – the new project from Aidan Moffat (Arab Strap) and James Graham (The Twilight Sad) – released their debut album, These Actions Cannot Be Undone this year. The album was released accompanied by new single ‘Face To Fire (After Nyman)’, which builds from a swirling synth figure into a fuzzed-out behemoth…

The British Queen of Soul, Mica Paris, joins us at True North 2022 in a one-of-a-kind celebration of the legendary Aretha Franklin. Mica will be joined by an array of special guests to lead us through the classic hits such as Respect, I Say A Little Prayer, You Make Me Feel Like A Natural Woman and many more in one…

Michael Timmons is a songwriter from East Kilbride who creates beautiful fragile music, sustained by reverb laden finger-plucked electric guitar. Produced by Andy Miller (Mogwai, Songs: Ohia, Life Without Buildings) and with input from The Twilight Sad’s Andy MacFarlane, he released his second album, The Lightness of the…

Nitin Sawhney CBE, is one the most distinctive and versatile musical voices around today, achieving an international reputation across every possible creative medium. Sawhney has become a modern-day ‘Renaissance man’ in the worlds of music, film, videogames, dance and theatre. His endless creative curiosity makes him a…

Stina Marie Claire is the new solo project of singer/songwriter Stina Tweeddale aka Honeyblood. She revealed the new project in August 2021, developed with the support of her fans throughout 2020 while she was unable to tour and record with her supporting live band. Taking inspiration from dark and cloudy ’90s indie rock…

AiiTee, a.k.a Scotland’s darkest berry, has the music to match her moniker. Her soulful voice accompanied by the sound of soft R&B and Afrobeats on her EP ‘Love Don’t Fall’ is definitely sweet. Growing up in a Christian household and going to church, the influences of gospel music can be heard in AiiTee’s debut single…

Adam Ross is a songwriter based in north-east Scotland. As a solo artist and with his band, Randolph’s Leap, he is known for his trademark style of poignant, observational songs and his knack for wordplay and humour. His critically-acclaimed debut solo album, ‘Staring At Mountains’ was recorded in the unusual settings of…