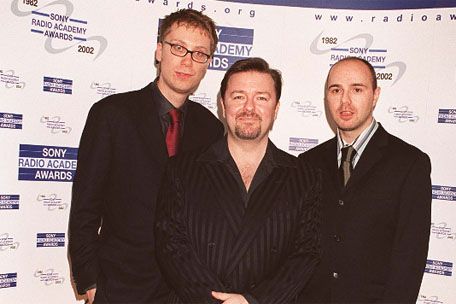 Rockers Van Halen are trying to ban Karl Pilkington's version of 'Jump' from appearing in 'An Idiot Abroad: The Bucket List' because his performance of their hit was so ''terrible''

Van Halen are trying to ban Karl Pilkington's version of 'Jump' from appearing in 'An Idiot Abroad: The Bucket List'.

The Sky1 TV show - devised by Ricky Gervais and Stephen Merchant - sees Karl being sent around the world to undertake a list of challenges you should do before you die, with one of them being to perform in an American 'Glee'-style chorus club.

He sang the rockers' hit 'Jump' but his rendition was so bad, the band are trying to stop it from being aired.

Ricky said: "Van Halen are trying to put a stop to it, because it is that bad. But Sky have got a blanket agreement so we can put it out in England. But we can't put it out in America or on the DVD.

"But they can't stop us. Even if I have to put it out on the web it's being used."

Ricky admits the performance is awful as Karl has to learn the song as well as a routine and gets it all wrong.

He added: "He's doing 'Jump' and he's so terrible. It's the most mortifying thing I have ever seen. I was cringing. I was watching it through my fingers. You know when you wind a mate up and it's bad and then you wish you hadn't done it? That's what we felt."