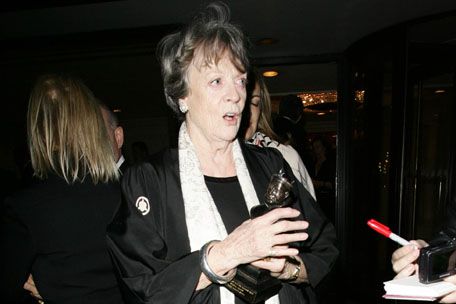 The cast of 'Downton Abbey' have become ''obsessed'' with cooking their food looks presentable when they're shooting scenes in the kitchen,

The actors and actresses who play kitchen hands and cooks in the ITV1 period drama admit they are more worried about making sure their food looks presentable than getting their lines right.

Sophie McShera - who plays kitchen maid Daisy Robinson - said: "Sometimes you get so obsessed with the actual kitchen job that you don't even worry about what you are saying. Your lines become a side note.

Meanwhile, it was recently revealed the set of the show is haunted.

The hit programme - which also stars Dame Maggie Smith and Hugh Bonneville - is filmed at Highclere Castle, Berkshire, and Lady Carnarvon, the country pile's chatelaine, thinks there are spirits and ghosts living all over stunning property.

She said: "There are a few different ghosts here. We all know who they are. Some people see ghosts. Some don't. It doesn't matter.

"But a lot of people have lived here, and I think you can tell when something terribly upsetting has happened in a room."