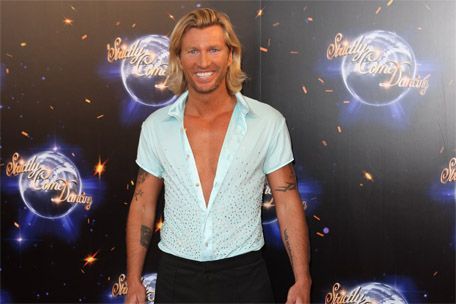 Former footballer Robbie Savage broke his nose during Saturday night's (22.10.11) episode of 'Strictly Come Dancing' after clattering into a camera when he slid across the dance floor

The former footballer slid across the dance floor on his knees to kiss a camera as part of his saucy performance but misjudged his speed and clattered into it nose-first, leaving him with a painful injury.

He put a picture of his busted honker online, saying: "This is commitment for you!! Lol smashed my huge nose on the camera!! (sic)"

However, the trick seemed to have worked as Robbie and his professional partner Ola Jordan received a standing ovation from the audience for their jive to 'Love Man' and earned their best score of the series - 27 out of 40 - from judges Bruno Tonioli, Craig Revel Horwood, Len Goodman and Alesha Dixon.

Meanwhile, Robbie's fellow hopeful Russell Grant may be forced to quit the BBC One show after injuring his knee during the competition, and is set to have an MRI scan today to find out the extent of the damage.

A source told The Sun newspaper: "Russell is so worried. And everyone else is too - they all love Russell."