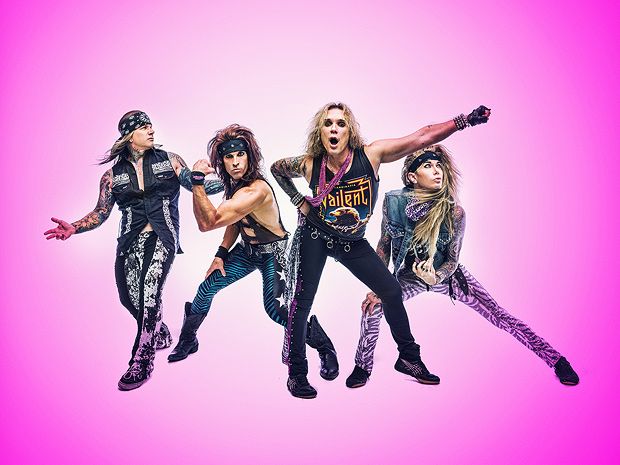 Nope, not Arrested Development’s Motherboy (although the resemblance is striking), but Steel Panther, LA’s comedy glam/hair metal/rock four-piece are coming to the UK for a handful of stadium shows.

A mix of parody, hard rock, fun and fabulous hair, Steel Panther are one of the premier party bands out there. Touring in support of their upcoming live CD/DVD Live from Lexxi’s Mom’s Garage, (released on Feb 26) the band plan to drop in on the UK for four irreverent nights in London, Cardiff, Manchester and Birmingham.

Steel Panther have released three albums: 2009’s Feel the Steel, 2011’s Balls Out and their most recent offering, 2014’s All You Can Eat, the success of which has seen them jump to the top of the Top Current Comedy chart, as well as All You Can Eat nipping in to reach 24 on the Billboard Top 200 Album chart.

Originally a covers band playing parody songs on the Sunset Strip, Steel Panther got wise to the fact that snappy lyrics and smart spoofing sells, and their YouTube channel is packed full of smart comedy songs that didn’t take long to get noticed. They’ve appeared on Dancing with the Stars, Truck U and Bad Girls Club, played the main stage at Download Festival and have been joined live by the likes of Aerosmith’s Steven Tyler, Kiss’ Paul Stanley, Avril Lavigne, Slipknot’s Corey Taylor and Linkin Park’s Chester Bennington.

Foot-on-the-monitor Sunset Strip cock rock homage which may not be entirely serious. 'Death to all but Metal.'