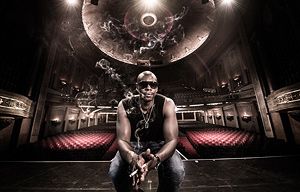 US stand up and actor David Chappelle has announced eight rare UK dates. He'll be playing two shows per night (7pm and 9.30pm) in London from 6–9 September. One of the world's greatest stand ups who has appeared in several huge Hollywood blockbusters (including Robin Hood: Men in Tights, The Nutty Professor, Con Air and You've Got Mail) but is probably most famous for sketch comedy series Chappelle's Show, that burned bright for three series before Chappelle 'retired' in 2006. Nothing was off limits with Chapplle directly addressing sex, racism, gun violence and drugs head on, alongside outrageous his infamous celebrity spoofs ('I'm Rick James, bitch!').

This run of intimate shows is only the second time Chappelle has appeared in the UK to perform a full stand-up set, following his sold-out run at Eventim Apollo, Hammersmith, in 2015. This is bound to sell out so if you want to see a true master at work grab your tickets now.

The American stand-up (and producer, screenwriter and actor) takes influence from his sketch comedy past to blend socio-political humour with dark comedy.