Put down your Proust: Mrs Brown's Boys goes on another UK tour 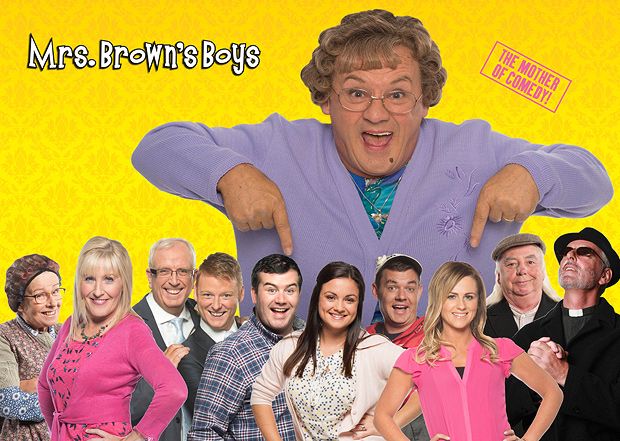 Every now and then, it's good to indulge in a little high art. Studies* have shown that imbibing intellectually stimulating content and offering oneself up wholly at the cultural altar that is theatre is beneficial for countless reasons. Well, your mind and soul will be well served next spring, as the erm, comedy**, series, Mrs Brown's Boys is set to go on a tour of the UK and Ireland.

*we made up the studies.
** we didn't make up the comedy description

Anyway, yes, the greatest show of our time is taking its carefully-considered writing and subtle brand of intelligent underacting on tour. Good Mourning Mrs Brown is written by and starring Brendan O'Carroll, and sees Agnes Brown planning Granddad's funeral. The only problem is that granddad is not dead. Inspired.

The press release we got about this tour featured the following paragraph, which we will now proceed to cut and paste: 'Mrs Brown's Boys success and achievements has been nothing short of incredible. From awards and accolades including three National Television Awards, TV Choice Awards, two Scottish BAFTAs, three IFTA awards with three nominations this year, a TV Times Award, Royal Television Society Winner and a TV BAFTA for Best Situation Comedy to being a ratings smash across the globe, Mrs Brown's Boys live has also broken box office records across the UK and Australia.'

Nothing short of incredible is right. Well, anyway, here's the full list of UK dates in 2017

A brand new comedy musical brought to you by Brendan O'Carroll and Mrs. Brown's Boys. The hilarious, emotional and exhilarating show is based on the hit sitcom bringing you back the well-known characters of the original series.