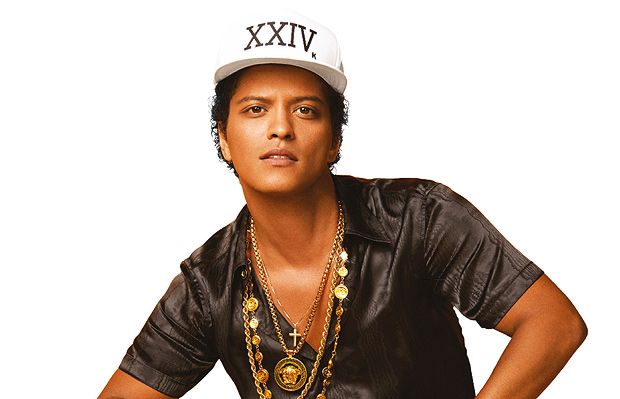 Bruno Mars, the 31-year old Grammy award winner known for his undeniably catchy songs 'Marry You', 'Grenade' and 'Just the Way You Are', has announced a 90-date world tour, including eleven UK dates across 8 cities. The tour announcement marks the release his new album 24K Magic on Fri 18 Nov.

Pronounced 'twenty-four karat magic', the tour is Mars' first globe-spanning tour since his mega successful Moonshine Jungle World Tour in 2013. The first date is in Antwerp, Belgium on 28 Mar and the pop singer will then make his way around Europe, before arriving in the UK first at Glasgow's Hyrdo on 12 Apr, before hitting Liverpool, three dates at the O2 and on to Birmingham, Nottingham, Manchester, Leeds and Sheffield. He'll then continue his 2017 tour back in the US making appearances in Las Vegas, Chicago and New York, to name just a few.

Before he heads off on tour, Mars is expected to make a number of high profile TV appearances including opening the 2016 American Music Awards on Sun 20 Nov and a performance at the Victoria's Secret Fashion Show on Mon 5 Dec.

Soppy ballads and R&B with a tasteful hip hop edge from the all-conquering commercial troubadour who has also written a bunch of hits for other artists including Travie McCoy and BOB and who comes backed with a fine old school band of funk soul brothers.