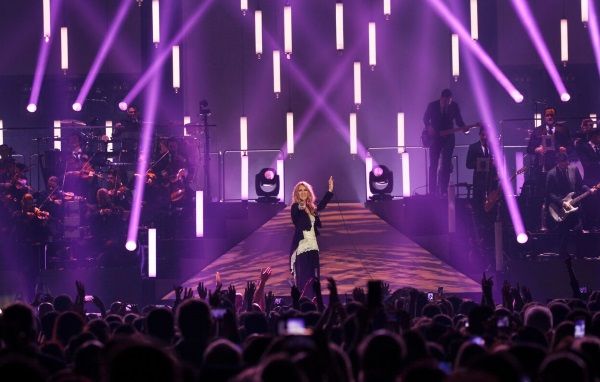 She may be a global shopping aisle music sensation but unbeknownst to many, she's also quite the character.

If you're a fan of Céline Dion, you may have already heard the news that the Canadian mega-star will be stopping off in Glasgow for the first time in 21 years. Having last performed on Scottish soil at Edinburgh's Murrayfield Stadium in 1999 and at the SECC in 1996, fans that have been eagerly anticipating her return will finally get the chance to see Dion perform hits from her 30-year career as part of her upcoming UK tour.

If you're not a fan of Céline Dion, this news probably won't interest you in the slightest. Perhaps the only thing you associate the singer with is 'My Heart Will Go On' (aka that song outta Titanic)? If that is the case, you may be missing out because as well as being one of the best-selling artists of all time, she's also equal parts weird and hilarious. Need further proof? Here, we present you with some of our favourite Céline Dion moments.

Her attempt at Wheel of Musical Impressions

Who'd have thought that Dion could pull-off a killer Rihanna and Sia impression? Her appearance on The Tonight Show may go down as one of our all-time favourites.

The time she donned a Titanic sweatshirt
Let's be honest, Titanic wouldn't have been the same without Dion's vocal stylings. She might not have been in the film but she was still a critical element. And here she is, reminding us of her iconic status.

The way she talks about The Muppets

Everyone loves The Muppets but Céline Dion really loves them and hearing her discuss her love for Kermit is really quite endearing. Her appearance as Miss Piggy's fairy godmother in Muppets Most Wanted also deserves a special mention.

The fact that she used to have her own private water park
If you have a 10,000-square-foot house, surely building an adjoining water park seems like the next sensible step. This was certainly Dion's thought process as she arranged for a private water park to be built for her Jupiter Island mansion in Florida, which included two massive pools, a giant twisting slide and lazy river.

How anyone could make LMFAO's 'Shots' sound half-way decent is beyond me. But here it is, turned into a more Dion-sounding number, complete with her trademark melismatic belts.

Her entire An Audience With … performance

As well as providing an excellent example of her unique sense of humour, An Audience With … Céline Dion is a hugely entertaining show, giving an insight into her personal life, music and Las Vegas residency through questions from a packed audience of celebrities.

She can twirl a baton like no one's business

Most singers use choreographed routines to wow their audiences but Céline Dion takes it to a whole new level by including baton twirling in her shows. She's also been known to twirl part of her mic stand during live performances proving that there's truly no end to her many talents.

The critically-acclaimed, award-winning Canadian singer performs her soft-rock and pop numbers from across her career. You'll know her mainly from 'My Heart Will Go On.'