10 of the best tracks by Arcade Fire 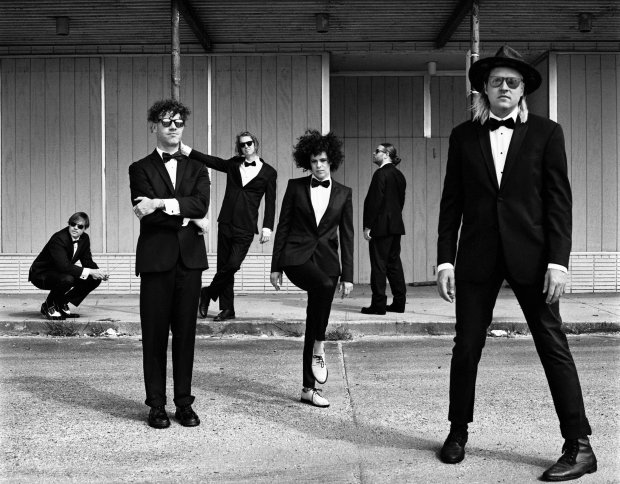 With tickets on sale for their Infinite Content UK tour tomorrow, we take a look at some of the group's finest moments

On Fri 28 Jul, Arcade Fire will release their fifth studio album Everything Now, with presale tickets for the band's Infinite Content tour going on sale at 9am on Wed 26 Jul. To prepare, we've revisited some of our favourite Arcade Fire tracks from the last 15 years.

Listening to the band's self-titled debut EP (self-released in 2003), it's amazing to think that in the present day they're selling out the biggest arenas in the world. Commonly referred to as Us Kids Know, its seven tracks are thematically ambitious, but sonically timid – the instruments were all recorded individually, so the EP lacks the performative energy that comes through on later albums. Closing track 'Vampire/Forest Fire' is a gem though. A beautiful country soundscape is peppered with striking lyrics about love and abuse, with vocalist Win Butler introducing the second verse by crooning; 'Your father was a pervert, face down in the dirt he taught you to hurt'.

By the time Funeral's opening track is through, you know you're onto a special band. With its apocalyptic portrayal of a snow covered neighbourhood and tearful parents, 'Tunnels' introduces an adolescent narrator who dreams of running away and starting again, a recurring theme with Funeral, which contains countless references to 'the kids'. There's terrific ambiguity to the lyrics; the escape could be from personal trauma, from war, from natural disaster. From a gentle piano introduction, the song builds and builds until every last member is pounding their instrument. One second tender, the next bristling with urgency, it sets the tone for a modern classic.

Funeral's other showstopper is 'Haiti', penned by Régine Chassagne, the band's co-founder (and alongside husband Win Butler, one half of indie-rock's most notable power-couple). While the sadness of 'Tunnels' is non-specific, 'Haiti' comes from Chassagne's own experience, dealing with her own parents' forced emigration from the caribbean country during François Duvalier's brutal dictatorship. A lament to those left behind, its exotic instrumentation and breezy feel offers a stark contrast to lyrics about gun-toting soldiers.

Arcade Fire are masters of the slow build-up, but the sound of 'Power Out' kicking off is more akin to an explosion. Inspired by a real life storm that left some in the North American east without power for months, it paints a picture of political unrest and dissatisfied youth. 'Don't have any dreams, don't have any plans', sings Butler, that ambivalence later giving way to anger ('I went out to pick a fight with anyone'). Propelled forward by chugging guitars and double snare hits, it's one of Butler's rawest vocal performances.

The band's decision to re-record 'No Cars Go' for sophomore album Neon Bible was an inspired one. If Funeral was dystopian fiction, Neon Bible was a rallying call to arms against real 'enemies': governments, religions, warmongers and a culture obsessed with notions of celebrity. The group bought a church named the Petite Église to record Neon Bible, and the album has gravitas in spades. 'No Cars Go', it's penultimate track, sees Butler deliver his message to the assembled women, children and old folks. 'Let's go! Don't know where we're going.' Wherever it is, he really believes it's a better place.

Inspired by Joe Simpson, the pushy father of Jessica and Ashlee, '(Antichrist Television Blues)' is a rip-roaring crusade about the quest for fame at any cost. Over a simple chord progression, broken by a keyboard solo that wail and moans like a caged animal, Butler sings of exploitation and bemoans the hypocrisy of those who use religion to justify their own selfish actions. What '(Antichrist Television Blues)' lacks in subtlety, it makes up in poignancy.

The Suburbs deservedly beat Eminem, Lady Gaga and Katy Perry to the 2011 Grammy for Album of the Year, confirming that Arcade Fire had arrived as bona-fide A-listers. Compared with the full on, and occasionally heavy-handed, intensity of Neon Bible, the group's third album had an understated quality, evident most clearly on the title track, but was no less ambitious conceptually. Harking back to the Butler brothers' childhoods in Texas, 'The Suburbs' takes four chords, some delicate piano and strings, and looks back at those years and the passing of time.

A slab of pulsating electronica, 'Sprawl II' is the rousing climax to The Suburbs. 'They heard me singing and they told me to stop', cries Chassagne at the top of a song that's ultimately about the virtuous glory of expression in a world full of 'dead shopping malls'. It marked a sea change for the band musically, and they haven't sounded the same since. A spectacularly euphoric pop stunner.

'If you can get James tapping his foot, you know you're on the right track', Win Butler said of the sessions for fourth album Reflektor, which was produced by LCD Soundsystem's James Murphy. The finished product was the sound of a band who had never sounded so much fun, with the carnival-esque 'Here Comes The Night Time' the most thrilling of all. It's a track which keeps the listener guessing, a frantic opening that curls up and then, four minutes later unravels frantically into the musical embodiment of the finest Port-au-Prince street party. No wonder Murphy's toes were a-tapping.

The best of Everything Now's tracks to date, 'Creature Comfort' is ushered in with the sound of some ominous synths, hinting at something more akin to Nine Inch Nails or The Knife at their darkest, before revealing a hook that's one of the most addictive in their considerable back catalogue. Butler tackles some dark subject matter (the song is explicitly an 'anti-suicide' anthem) and ponders whether 'Everything Now' culture is contributing to human sadness. There's a self-referential lyric about 'our first record' that will inevitably prove divisive, but one thing's for sure – Arcade Fire aren't retreading old ground, and still have plenty of life left themselves.

Presale tickets for Arcade Fire's Infinite Content tour go on sale Wed 26 Jul at 9am. Tickets go on general sale at 9am on Fri 28 Jul.