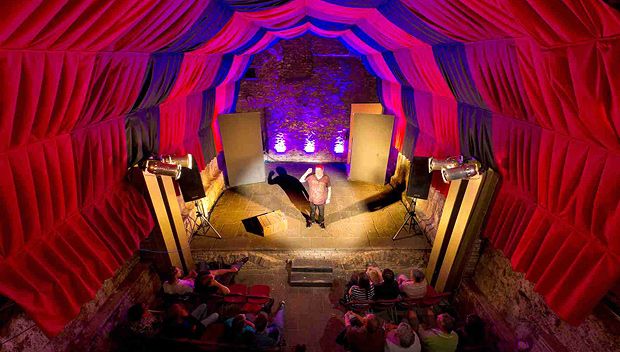 Great subterranean venue (as the name suggests) getting more and more popular due to its unique atmosphere. See listings for details.

There are 8 events at this location

Aynsley Lister is one of the UK’s hottest contemporary blues guitarists – many consider him to be among the best in the world. His unique brand of blues-based rock delivers contemporary song writing fueled with the kind of heart and soul that’s missing from so much modern music. Whether passionately writing and recording…

For over a decade, Black Sabbitch has been selling out shows and wowing even the most difficult to please Sabbath worshipers, gaining a rabid fan base and the respect of critics, fans, and musicians alike. They have become festival favorites, consistently performing with some of the world’s biggest acts, in a world seldom…

The first album « Oddity » was full of promises for the start of an epic journey but it is on stage where he starts to carve his signature – costumes, make-up, psychedelic atmospheres, humour and sensuality. Yes, you think of Genesis, of Alice Cooper and David Bowie, of Led Zeppelin and Pink-Floyd too. But eventually, you…

Love with Johnny Echols make a return visit to the UK after their sell-out tour of 2019 to celebrate the 55th anniversary of the release of Forever Changes. Johnny Echols says “We had planned that the 2019 UK tour would be our last overseas tour. None of us are spring chickens but this crazy time in lock down has made us…

'Since You’ve Been Gone’, ‘You Can Do Magic’, ‘New York Groove’, ‘So You Win Again’, ‘No More The Fool’, ‘Liar’… Russ Ballard’s songs are on permanent heavy rotation the world over. His own first hit record was ‘God Gave Rock and Roll to You’ [memorably turned into a global mega-hit by Kiss] with his band Argent in 1974…

Scottish indie rock for fans of Frightened Rabbit, Idlewild and The National.