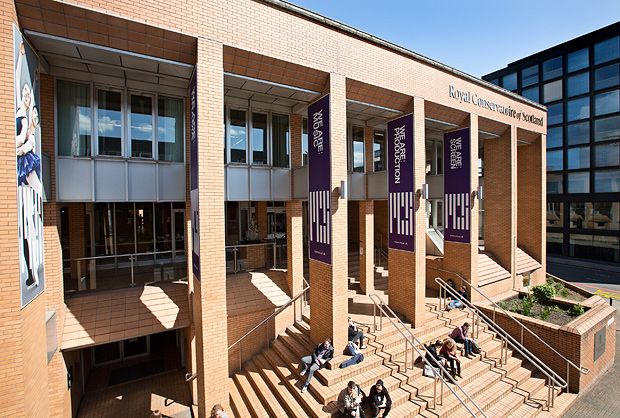 The Royal Conservatoire of Scotland's current building only dates back to 1988, but the institution itself is much older, tracing its origins to the Glasgow Educational Association, founded in 1845 as a rival to Glasgow University. By 1944 it had morphed into the Royal Scottish Academy of Music, which added 'and Drama' to its name in 1968. The RSAMD became the Royal Conservatoire of Scotland in 2011, after it became clear that its focus had broadened from theatre and music to television, technical education and ballet.

The RCS has no less than five internal performance spaces: Stevenson Hall, the New Athenaeum Theatre, the Guinness Room, the Alexander Gibson Opera Studio and the Chandler Studio. A sixth, Speirs Lock Studio, is in Cowcaddens and specialises in ballet and musical theatre.

The closest railway stations are Central and Queen Street, and Cowcaddens and Buchanan Street subway stations are also convenient. Renfrew Street is served by bus routes 3, 6, 6A, 6B, 7, 7A, 10A, 16, 17, 18, 60, 60A, 61, 75, 240X and M3, among others. The nearest car parks are on Cambridge Street and at Buchanan Galleries, and disabled parking is accessible from Hope Street.

There are 25 events at this location

Musical double act Phil and Aly bring together a feast of musical talent and witty banter.

We are thrilled to share the premiere of Bound – a performance from the graduating BA Modern Ballet students. ‘Bound’ has been created entirely at home with the students filming their work on mobile devices and zoom calls, and choreographed by Lecturer Diana Loosmore. This piece celebrates the work of our graduates and…

The concept for this project came during the lockdown in late March and early April. I remember reading articles suggesting that live musical performances may not take place again for up to 2 years and perhaps more. So, I thought that the best way for me to continue making music with others was to record remotely with…

On The Verge: Benny Be Well

Benny has just returned to his childhood home after his first Term away at college. Although he’s only been away for a few months, his fifty something year old parents suddenly feel as though they’ve aged thirty years and are now living out the last few years of their strange disconnected lives as seniors.  Upon returning…

On The Verge: Caged

After losing the person closest to her, a woman is left completely alone. In her loneliness, a lust for revenge grows and she finds her everyday life infected by darker thoughts that culminate in an act of extreme violence. Drawing on the experiences of the haunting silences that became commonplace during each lockdown…

On The Verge: Gear

On the morning of their friend Sean’s funeral, a broken friend group is forced back together by the tragedy. Blame and resentment come to the surface as they discover they are not welcome at the funeral – but who is responsible? The three boys who began their relationship with drugs the night they met at freshers two…

On the Verge: Hag

In the woods so dark and deep, a crooked spinster spins a spell… Working with an anthology of Rosie Hart’s poetry, “hag” brings together the verbal and the visual in this dynamic film exploring the theme of witches. When a woman steps outside of her prescribed role she becomes a target. 400 years ago. 1 year ago. Today.

On The Verge: If someone asks? this is where I'll be

A short little film that is absolutely based on real-life but at the same time completely not based on real-life, well, not mine anyway. That leads us to the question of how long do you stay in a bath until it’s cold? This untrue film is inspired by the lyrics of the Talking Heads. Things I have learned making this film…

On The Verge: Self-Inflicted

Sometimes, it’s ok to sit back and take in what’s going on in the world on a daily basis; the politics, famine, corruption, growth, change, amongst other things… But sometimes, overstimulation makes us lose sight of what we were looking for in the first place. We can lose sight of ourselves too, leaving us wondering where…

RCS Presents: A Celebration of Latin Music in Jazz, Directed by Mario Caribé

Students on the Royal Conservatoire of Scotland’s internationally acclaimed jazz course explore the Latin American music that has created a popular fusion with jazz over the past seventy years in a concert for the head, heart and feet. With recordings such as saxophonist Stan Getz’s bossa nova classic with Brazilian…

RCS Presents: SCO & RCS Winds Side by Side

We have a very special release brought to you by RCS and Scottish Government in celebration of St. Andrew’s Day. Join traditional music and acting students for a performance of music and spoken word inspired by countries from around the world. Jenn Butterworth is one of the most notable folk guitarists in the UK acoustic…

Inspired by three different sculptures created in America’s swinging 1930s by artists associated with the Harlem Renaissance, William Grant Still’s Suite for violin and piano will receive its RCS premier. The music’s three movements will take you on a musical journey where you dance the Blues, sing a poignant lullaby and…

As today’s musical director, Pete Johnstone, says: “Art Blakey is one of the most important voices in the evolution of jazz.” From the late 1940s, when he recorded for legendary jazz label Blue Note Records with Art Blakey’s Messengers, Blakey shared his unshakeable message that jazz should swing hard and espouse the…

RCS Presents: The Not Too Distant Now

The next in our Keyboard Department’s streamed concerts, reflects on a theme near, if not dear, to us all. Invited to submit collaborative work that focused on “togetherness and separation”, our students came up with ideas that ranged from Shakespeare’s Romeo and Juliet to Holst’s musical depiction of The Planets…