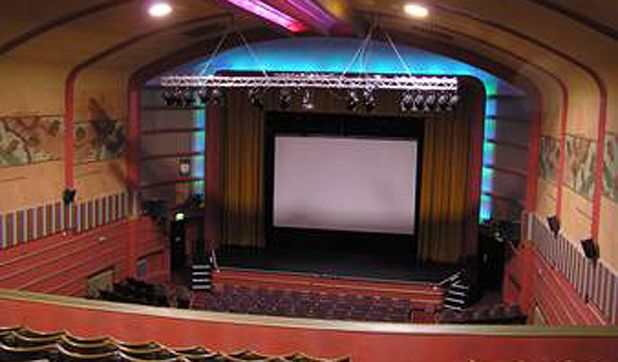 Built in 1936 as a cinema and theatre, by the late 70s the Tivoli was under threat of demolition but following a long campaign to save the building it reopened in 1993. Today it continues its tradition of showing a mixture of cinema and live performance and sometimes both, with a good deal of events being event cinema screenings. It receives no Lottery or government funding and relies for its revenue entirely on its customers and supporters.

The nearest train station to Wimborne Minster is Poole, nearly eight miles away. The No 3 bus runs a regular service from Poole station to the centre of the town.

There are 11 events at this location

A Head Full Of Coldplay: A Tribute To Coldplay

Capturing and recreating the passion and sound of one of the biggest bands in the world. Playing the biggest hits and rarely performed live tracks across every album from Parachutes to Everyday Life. A unique show for every fan of Coldplay.

Critically acclaimed singer-songwriters Jamie Lawson, Gemma Hayes, Richard Walters and Laura Zocca join forces for a special acoustic round show, unlike any other gig you will go to next year. Each artist will perform a song, followed by the next act, the show will move around from artist to artist, like a tag team of…

If you are going to a Beth Nielsen Chapman concert get ready to laugh and cry and, well, just fasten your seat belt. One thing you can count on is one great song after another and some fascinating stories woven between them. Twice Grammy-nominated Nashville based, Beth Nielsen Chapman has released thirteen solo albums and…

From The Jam Unplugged

From The Jam Unplugged is a chance to catch Bruce Foxton and Russell Hastings up close performing acoustic interpretations of classics and fan favourites by The Jam such as Town Called Malice, Start!, Liza Radley, The Butterfly Collector, Down In The Tube Station At Midnight and many more.

Get ready to dive into a rabbit hole of the best jokes in the world - star of Live at the Apollo and sell-out sensation Gary Delaney is back! One of the most sought after joke writers in the country and longstanding Mock the Week special guest, Gary has been through the laughing glass and he's ready to bring you a brand…

Americana from the Nashville singer-songwriter.

The British music legend performs his pop and disco hits.

Mark Watson: This Can't Be It

We've all had some pondering to do about the fragility of life recently, but dont worry, skinny national treasure Mark Watson has it covered. At 41, hes halfway through his days on earth, according to the life expectancy calculator app he paid £1.49 for. That life is in the best shape in living memory… but one problem…

Two of the 80s recognisable post punk and new wave stars Toyah and Hazel O'Connor are joining forces for this special show. Performing alongside their full live band, each of these legends will play their own sets plus some duets and surprises along the way. This hit-packed retro fest will include such classics as Thunder…

Looking for events in Wimborne Minster?