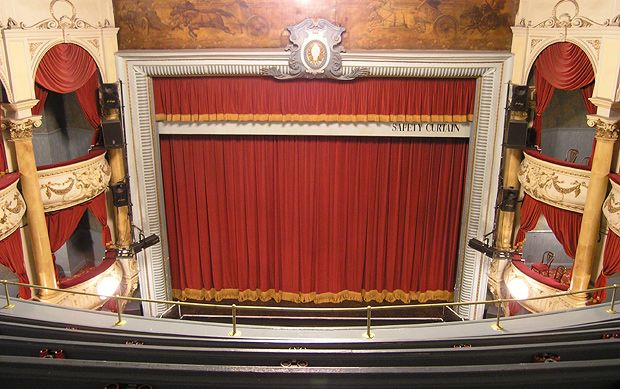 As well as putting on musicals, theatre, comedy and music over the years, in 1902 the Grand Opera House was also the home of York's first public performances of films. A conversion of a warehouse and a corn exchange, after a handful of closures and refurbishments, it opened for good in 1993.

As well as putting on musicals, theatre, comedy and music over the years, in 1902 the Grand Opera House York was also the home of York's first public performances of films, originally called Empire Theatre. A conversion of a warehouse and a corn exchange, after a handful of closures and refurbishments, it opened for good in the 1980's.

There are 48 events at this location

Get ready as we spice up your life, taking you back for good and hit you one more time with the ultimate 90’s party night out! Our talented cast will have you reaching for the stars as we throw it back to you, for one night only, live on stage, as we celebrate the 1990’s. The music of a generation brought to life with…

As the dust settles and we emerge blinking into the dawn of a new year, the men and women of this great country will need answers. Answers that they know they need, answers to questions they never knew existed. And when that moment comes, who better to show the way, to provide those answers, than the people’s man of the…

A brand new show from everyone's favourite bigoted landlord, Al Murray, star of Happy Hour. Please only cheer at the irony and stay in your house if you actually hate the French.

Strictly Come Dancing professionals Anton Du Beke and Giovanni Pernice join forces in 2021 for their first ever tour together.

Anything for Love – the Meatloaf Story

Anything For Love – The Meat Loaf Story: It’s all about the music. Following his sell out 2019 national tour, the highly acclaimed Steve Steinman brings you his brand-new production featuring over 25 of Meat Loaf and Jim Steinman’s greatest hits, with special guest star Lorraine Crosby, the female lead vocalist on Meat…

Critically-acclaimed Back to Bacharach celebrates the magical music of Burt Bacharach, one of the most accomplished popular composers of the 20th Century, who penned some of the most memorable and iconic hits that stand the test of time. This exciting production touring the U.K. is performed by the four of the finest west…

Stage adaptation of David Walliams' story about Joe Spud, the richest boy in the country, who transfers to a local comprehensive in the hopes of making a friend.

Black is the Color of My Voice

Written and directed by Apphia Campbell Inspired by the life of Nina Simone, and featuring many of her most iconic songs performed live. Apphia Campbell’s acclaimed play follows a successful singer and civil rights activist as she seeks redemption after the untimely death of her father. She reflects on the journey that…

Carole: The Music of Carole King

This highly acclaimed concert-style production continues to captivate audiences across the UK with its spectacular re-creation of the classic songbook that made The Carpenters a legend in the world of popular music. The outstanding vocal talents of Claire Furley and pianist / artistic director Phil Aldridge take…

From a young kid with big dreams, to the dizzying heights of global stardom, The Cher Show tells the incredible story of Cher’s meteoric rise to fame, flying in the face of convention at every turn. In a dazzling glitter fest of flamboyant glory, sparkling with Cher’s signature wit and style, you’ll be spinning in the…

This award winning spectacular is one of Europe’s biggest and best loved productions of the Blues Brothers. The high octane, adrenaline pumping musical mash-up has jump started the legacy of Jake and Elwood for a new generation.

The soundtrack to the smash-hit movie The Commitments played live; expect all the classics from 'Mustang Sally' to 'Take me to the River'.

Dave Gorman: Powerpoint to the People

Dave Gorman, the man behind Dave TV’s hit show Modern Life Is Goodish as well as Are You Dave Gorman? and Googlewhack Adventure, is back on the road with a brand new live show, Powerpoint To The People The ‘high priest of the comedy Powerpoint talk’ (The Times) is touring again – as much as anything to demonstrate that a…

Musical comedy from the Irish stand-up.

From the producers of Seven Drunken Nights-The Story of The Dubliners and featuring an international cast of singers, musicians and dancers Fairytale of New York brings you all of your favorite Christmas songs including Driving home for Christmas, White Christmas, Oh Holy Night, Winter’s Tale, Silent Night and of course…

Fastlove: A Tribute to George Michael

An affectionate celebration of the life and music of George Michael including his early days with Wham!.

In a cultural landscape filled with endless pundits and talking heads, Fran Lebowitz stands out as one of our most insightful social commentators. An American original and purveyor of urban cool, the cultural satirist and author is pointed, forthright, unapologetically opinionated, and known for her hilariously dry social…

A Gala Celebration of Gilbert and Sullivan

Trailblazers of their time, GILBERT & SULLIVAN’s repertoire remains unparalleled. Featuring favourites from The Mikado, _The Pirates of Penzance, _HMS Pinafore, Yeomen, Gondoliers _and _Iolanthe, plus some sparkling gems that may be less familiar, this gala concert performance will delight both G&S aficionados and…

Harry is back with brand-new amazing jokes in an all-singing, all-dancing one-man spectacular. “I hadn’t realised how much I missed performing live until lockdown stopped me from doing it,” says Harry, “It’s great to be going back on stage and the good news is I am planning a very silly show.” Audiences will meet Harry’s…

The moving a capella ensemble who first came to international prominence on Paul Simon's Graceland album and have remained at the forefront of South African music for more than 30 years.

A celebration of the music of R&B singer Luther Vandross.

Tribute to Freddie Mercury and Queen, established in 1998.

Join our presenters as they dive deep into the world of science and look at how science shapes the modern world we live in with a few loud bangs along the way! They’ll take an anarchic approach to science communication whilst looking at the scientists, engineers and inventors who have shaped the modern world that we live…

Now celebrating 70 years, Agatha Christie’s The Mousetrap is the world’s longest-running play. As news spreads of a murder in London, a group of strangers find themselves snowed in at a remote countryside guesthouse. When a police sergeant arrives, the guests discover that a killer is in their midst!

The Osmonds: A New Musical

Musical telling the story of the world-famous musical family.

Every child in every school has one Christmas wish, to star in a NATIVITY, and at St Bernadette’s School they’re attempting to mount a musical version! Only trouble is teacher Mr Maddens has promised that a Hollywood producer is coming to see the show to turn it into a film

A Magical show where beautiful Princesses become Pop Stars! This is the children’s pop concert with a big difference. A musical spectacular starring four fabulous Fairy tale Princesses who just love to sing! It’s the perfect mix. Featuring a soundtrack of top pop hits from artists such as Little Mix, Ariana Grande, Taylor…

The cunningly entitled RETOUR DE NED is an indispensable theatrical road map for anyone aspiring to wear the yellow jersey on the Champs Elysées: a really very rough guide to the tactics (pedal faster) and challenges (not pedalling fast enough) which will need to be deployed to win the biggest bike race in the world.

The Rocket Man: A Tribute to Sir Elton John

Join us on a musical journey, charting the rise to fame of one of the biggest selling artiste of all time. Combining breath-taking vocal and piano performances, flamboyant costumes, a dazzling light show - all accompanied by an outstanding band and backing vocals. Travel back in time and be treated to all the hits such as…

An all-singing, all-dancing stage version of the popular films, packed with laughs and the odd tear.

These two, warring rag-and-bone-men, in their Shepherd’s Bush scrapyard home, became household favourites for entire generations throughout the 60s and 70s and still they continue to entertain audiences today. Marking 60 years since the first ever broadcast, Hambledon Productions (_Just Like That! The Tommy Cooper Show…

From the producers who brought you Lost in Music and The Magic of Motown. Get ready as we take you on a journey of Sweet Soul Music. Powerful performances from our talented cast will showcase some of the biggest hits spanning a generation. Featuring songs by Aretha Franklin, Earth Wind and Fire, James Brown, Wilson…

Thank You For The Music – The Ultimate Tribute To Abba

The Tiger Who Came to Tea

Direct from the West End, the Olivier Award nominated smash hit show, The Tiger Who Came to Tea returns on tour, celebrating over 10 years on stage! The doorbell rings just as Sophie and her mummy are sitting down to tea. Who could it possibly be? What they certainly don’t expect to see at the door is a big, stripy tiger!

Recreating the sights and sounds of the legendary Pink Floyd live in concert, this highly authentic show features over 50 years of hits by this iconic band. The highly acclaimed show also features over two hours of songs from both iconic albums Dark Side of the Moon and Animals as well as Wish You Were Here, Shine on You…

The World’s Most Dangerous Thrill Show! Starring Richard Cadell. X-treme Magic will deliver a non-stop adrenaline rush. A spectacular show packed with fire, illusion & death-defying stunts. Created in Las Vegas & brought over to the UK to entertain audiences up & down the country. Imagine making a motorcycle…

You Win Again: Celebrating the Music of The Bee Gees

Direct from London’s West End: You Win Again is out on tour – Celebrating the Music of The Bee Gees. The magical music of the Gibbs’ brothers takes you on a journey like no other, from Idea album, right through to Spirits Having Flown with all the incredible hits they wrote for Celine Dion, Diana Ross and Dolly Parton in…

Looking for events in York?