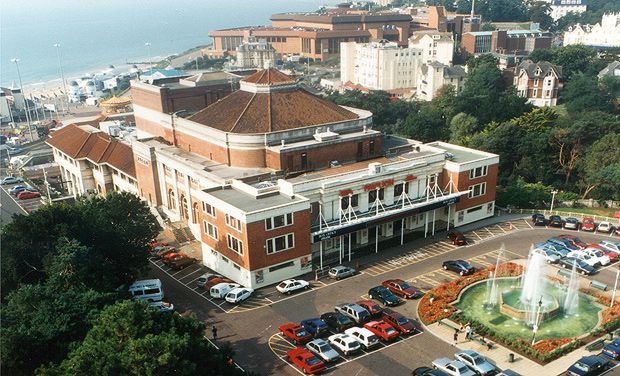 Built on the seafront in the 20s Bournemouth's Pavilion Theatre is a traditional art deco theatre space. The venue was refurbished in 2007 and now seats almost 1500. The Terrace Bistro is open between 10am–5pm everyday and also offers pre-show dining.

Limited pay and display parking is available at the Pavilion car park.

There are 35 events at this location

The Glasgow-born singer-songwriter performs acoustic versions of his back catalogue.

Former Beach Boy member and solo artist Brian Wilson delivers the greatest hits from his solo works alongside fan favourites from his career with the band.

AOR from the man who unleashed 'The Lady in Red' on the world, playing covers from his latest album.

The television regular – best known as the host of Mock The Week – brings his latest routine to the stage.

“This show is so-named because unfortunately, it’s horribly accurate. There have been far too many times I have made stupid mistakes or misunderstood something vital or jumped the gun in a spectacular display of tw*ttery. I thought I might tell some of these buttock-clenching embarrassing stories to give the audience a…

The well-established singer, actress and TV presenter performs a selection of soul, easy listening and pop songs from her long career.

Don McLean, author of the most famous song ever to have been inspired by an air accident, continues to tour but says he will not be releasing any more albums following his swansong Addicted to Black.

In Conversation with The Sopranos

Learn more about the TV show hit The Sopranos at this event, which brings together former cast members for a talk and Q&A.

Jack Dee: Off The Telly

Legendary voice of The Moody Blues

A comedy roadshow with a guaranteed four top professional comedians, with different acts in each show, a full bar and two intervals for refills. Also a good chance to spot people before they become famous.

The Magical Music of Harry Potter: Live in Concert

One of a kind film and music experience: The Magical Music of Harry Potter- Live in Concert with a Weasley brother! The Harry Potter films are one of the most successful film series in the history of Cinema. Revisit the award winning music with the London Philharmonic & Symphonic Film Orchestra in a unique concert…

Doo-wop vocal harmony man band doing it for the mums.

Scotland's unforgettable musical twins return to the stage with their singalong Caledonian anthems.

The hilarious Sarah Millican is back on tour with a Bobby Dazzler of a new stand-up show. In this, her sixth international tour, you’ll learn about what happens when your mouth seals shut, how to throw poo over a wall, trying to lose weight but only losing the tip of your finger, a surprisingly funny smear test, and how…

One of the best post-punk pop acts, helmed by the songwriting duo Glen Tilbrook and Chris Difford.

The one-time Genesis guitarist revisits his time in the band with new versions of songs he co-wrote from the period 1971–1977.

Three of the fiercest Drag stars from both sides of the pond take to the stage in this all-singing, all-dancing sickening live spectacular! Our Queens tear up the floor with a celebration of pops greatest divas

One of the most accomplished soul bands to grace the R&B scene, The Stylistics bring with them the sweet, soulful memories of years past.

At the height of their career, Tavares composed of five Cape-Verdean American brothers – Ralph, Chubby, Pooch, Butch and Tiny. Born and raised in Providence, Rhode Island, they were one of the most heavily covered bands of the Disco era and sold tens of thousands of copies of their sheet music to club bands and budding…

Sharp of both tongue and suit, Tom Allen (you'll have seen him on 8 Out of 10 Cats Does Countdown, Live at the Apollo and Channel 4's Comedy Gala) presents a brand new show. Ages 14+.

What's Love Got To Do With It?

Ultimate tribute concert to Tina Turner, presented by the award-winning producers behind Whitney - Queen Of The Night.

Whitney: Queen of the Night

A stunning celebration of the music and life of one of the greatest singers of our time. This award winning production features a sensational line-up of musicians and artistes, and together with a powerhouse and breath-taking performance in the spirit of Whitney, deliver a show that exceeds expectation on every level. …

The terribly nice young Pop Idol graduate who has been one of the few to almost entirely shake the shackles of reality TV to emerge a solid popster in his own right.

Looking for events in Bournemouth?