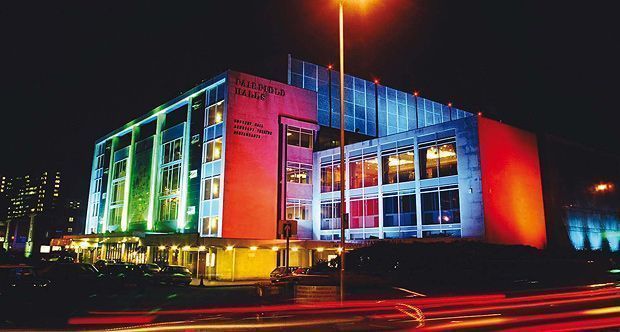 The large concert hall of Fairfield Halls has hosted everyone from the Who to Morrissey to McFly, and along with massively famous faces, Fairfield also plays host to local schools concerts, pro wrestling events and BBC live recordings. Built in 1962, the building also includes the Ashcroft Theatre, a civic hall and an art gallery.

There are 9 events at this location

The hits of one of the most successful and influential English pop bands of the 70s, revisited by original member Graham Gouldman and some new faces.

DICK AND DOM IN DA BUNGALOW LIVE   20TH ANNIVERSARY TOUR 20 years after the hit BBC show ‘Da Bungalow’ first burst on to our screens, quadruple Bafta award winners Dick & Dom are bringing their own special kind of mayhem live to Ipswich Regent Theatre! Fun for all ages and packed with chaos and familiar favourites…

New hour from the English comedian best known as a team captain on 8 Out of 10 Cats Does Countdown, plus Dave's Ultimate Worrier.

The Lady-to-Lady conference has given many ladies not only the audacity to dream again but also to boldly rise up to their calling. The atmosphere and the Ladies you meet during these conferences leave you inspired, encouraged, and ready to fine-tune your focus on the things that matter in your life – your God-given…

Strictly Presents: The Power of Dance

2022 will welcome a brand-new show from the Strictly Come Dancing family touring the UK - Strictly Presents: The Power of Dance. Featuring the spectacular professional dancers Janette Manrara, Dianne Buswell, Amy Dowden and Neil Jones, together with two special guest stars who will be announced soon. Directed and…

Looking for events in Croydon?