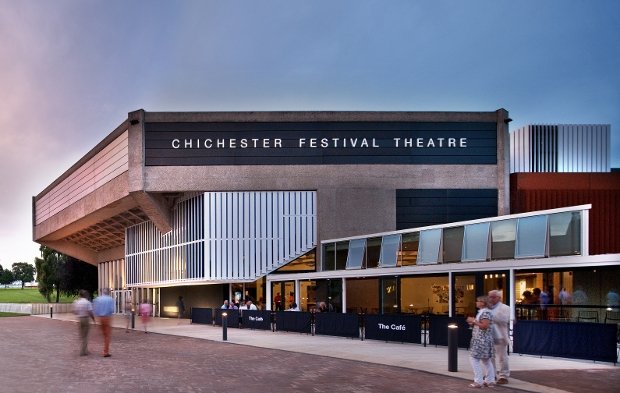 The Chichester Festival Theatre opened in 1962 and it original artistic director was Sir Laurence Olivier. It was here that the National Theatre was formed with productions often transfering to the Old Vic, which was then the NT's London home.

The architects were Philip Powell and Hidalgo Moya. The former notably worked on the Barbican in London. Chichester Festival Theatre was the UK's first thrust stage.

The Minerva Theatre managed as part of the complex provides a studio space next door. It opened in 1989.

Chichester Festival Theatre is one of the UK’s flagship theatres, renowned for the exceptionally high standard of its productions as well as its work with the community and young people. Situated in a cathedral city in West Sussex between the South Downs and the sea, the Festival Theatre’s bold thrust stage design makes it one of England’s most striking playhouses – equally suited to epic drama and musicals. Its studio theatre, the Minerva, is particularly noted for premieres of new work alongside intimate revivals.

The annual Festival season runs from April to November, during which productions originated at Chichester reach an audience of over 230,000. Year-round programming continues through the winter with the Theatre presenting high-class touring productions, as well as a traditional Christmas show mounted by the renowned Chichester Festival Youth Theatre.

There are 5 events at this location

Circus Zyair is proud to present a colourful and action packed hour and a half show with high energy acts from all over the world. The 2021 tour is a dazzling combination of circus, music and laughter. With a heated big top, comfy seating and an electric atmosphere from start to finish Circus Zyair promises to be a truly…

The Famous Five: A New Musical

The Famous Five are on a daring mission with the future of the planet at stake! Based on Enid Blyton’s multi-million-selling novels, this new musical written by Elinor Cook, with music & lyrics by Theo Jamieson, is an exciting family treat celebrating adventure and friendship for ages 7+. George isn’t happy at the…

Amanda Abbington, Frances Barber and Reece Shearsmith star in The Unfriend, a new play by award-winning writer Steven Moffat, directed by Mark Gatiss, which takes a hugely entertaining and satirical look at middle-class England’s disastrous instinct always to appear nice. Manners can be murder. Peter and Debbie are…

The Wind in the Willows

The inquisitive Mole meets Ratty, a water vole with a passion for boats. Soon the two are firm friends and settle down to life in Ratty’s riverbank home, surrounded by the neighbouring otters, rabbits, fieldmice and hedgehogs. They have adventures with the ebullient Toad and his passion for motorcars, and brave the snowy…

Looking for events in Chichester?