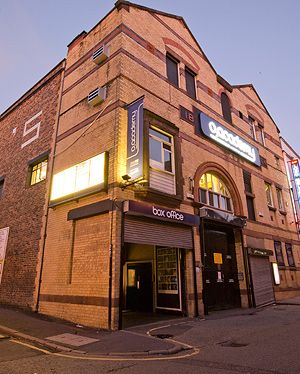 Situated in a 19th century warehouse Liverpool's O2 Academy was once home to the fiercely independent and much loved music venue Lomax. The venue consists of two performances spaces: the larger O2 Academy1 for the major international acts and a smaller O2 Academy2 for local talent. In some cases local and international combine, as when Paul McCartney played a homecoming show here in 2010.

Lime Street station is a couple of blocks to the south, and there are bus stops in London Road and Lime Street to the north and west. Note that ticket sales on the door on the night are cash only.

There are 50 events at this location

American singer-songwriter, notable for reaching the semi finals of the seventh season of American Idol and getting to the final three in RuPaul's Drag Race season six, goes all out with a soundtrack of raunchy electro pop.

It’s been a whirlwind few years for Aitch now 22, from first blowing up with "Straight Rhymez" at 18 years old to the cover of The Face Magazine. In that short time, he’s had six top 10 smashes, a string of brilliant collaborations including Stormzy, Young T & Bugsey, Ed Sheeran worldwide hit "Take Me Back To London…

English singer-songwriter and multi-instrumentalist. In 2016, he began recording and releasing demos at the age of 13.

Ranked number 14 in Q Magazine’s top 50 bands of all time and inducted into the UK Music Hall of Fame, Bon Jovi is a household name the world over. With front man and namesake Jon Bon Jovi at the helm since they formed back in 1983, the New Jersey band have sold over 120 million albums worldwide, performing more than…

Tribute to the new wave pop punk of Debbie Harry and co.

Bulsara and His Queenies: Queen Tribute

The four-piece band play rock and pop hits made famous by the group fronted by Freddie Mercury with Gareth Taylor as the iconic vocalist.

Cardinal Black are an alt.rock band from Wales fronted by Yamaha Revstar-wielding wizard Chris Buck. Their debut single Tell Me How It Feels (2021) toppled Noel Gallagher from the #1 spot in the iTunes Rock Singles Chart and their debut 4 track E.P. took the #1 spot on both the iTunes rock album chart and Amazon Rock Best…

Liverpudlian four-piece Crawlers have had a whirlwind 12 months. The alt-rock band have become synonymous with an eclectic brand of music combining grunge, rock, pop and indie into a sound packed full of attitude and socially conscious lyricism. An attitude that has seen the band explode on social media, recent single…

British rapper considered to be one of the pioneers of the UK drill scene.

Tribute to Jim Morrison's seminal LA rock crew. Expect renditions of classic hits such as 'Light My Fire', 'When the Music's Over' and 'Riders on the Storm'. The band recreate the sounds of the 60s using the same instruments that the Doors used in their heyday, including a Gibson G101, the Fender Rhodes Bass and a vintage…

The Detroit rockers invite you to join the punky disco party as they power though hits Gay Bar and Danger! High Voltage.

Typically laddish indie three-piece from Coventry who just about get away with their lack of originality with brute passion. The guys are off on a final tour, so this is the last chance to see them.

Tribute to the up beat emo rock of Fall Out Boy.

The Fillers are the world's first and best tribute to The Killers. Formed in late 2006 in the small town of fabulous Bury St. Edmunds in the UK, where The Killers had their initial success. Having interacted with the Killers themselves at close quarters we've captured an unrivalled sound, look and feel of the Vegas…

Much admired stripped-down angular and funky indie sounds from the earnest Foals.

The former Million Dead frontman has moved away from his hardcore roots to embrace rabble-rousing folk punk in a New Model Army style.

Indie band from Hamm founded in 2014.

You just can't keep a good psychedelic rock band down, and these far-out pioneers have been in the business for eternity.

British musician known for her work with Lewis Capaldi.

The House of Love

The return of the psychedelic pop group from Liverpool whose widescreen pop tunes were briefly popular in the mid-80s.

The Lancashire Hotpots: Top Of The Pots Tour

The Lancashire Hotpots return to the 100 Club this October for their Top of the Pots tour.

The acclaimed tribute act to the English rock band fronted by Robert Plant.

The Liverpool-based quartet play eardrum-shredding experimental metalcore, seeking to transform negativity into something positive and progressive. Their concept album The Cold Sun, set in an apocalyptic near-future, was recorded in Atlanta, Georgia, with producer Matt McClellan.

Nirvana tribute band based in the West Midlands. The band strive to be as close to the real deal as possible with the same clothes, instruments, effect boxes, drums and pre amps that the band used.

Pop Will Eat Itself

Punk-rock with reggae influences by the veteran band originally formed in London in 1977 but now re-formed with some original members. With support from Evil Blizzard, Blackbombers.

Sam Ryder is an English singer and songwriter who began his career in the hard rock and metal circuits, fronting groups like the Morning After and Blessed by a Broken Heart before starting a solo career as a pop artist. Wielding his versatile and dynamic vocal range, he parlayed an unexpected bout of viral success into a…

Quirky acoustic guitar duo who tackle everything from Queen to Daft Punk.

Tom Rogan is a singer songwriter from Liverpool UK, when only 19 years old in 2021 he became one of the country’s most successful rising artists capturing the attention of the music industry across the world. ‘Here We Are’ his debut single release with music producer and manager Chris Grant was a UK top 40 hit.

Wet Leg’s blend of dry wit and minimalist-punk riffs started off as a joke between Isle of Wight duo Rhian Teasdale and Hester Chambers. However, reality soon hit with their debut single ‘Chaise Longue’ becoming an overnight sensation and clocking up over seven million streams to date. With the numbers initially seeming…

Looking for events in Liverpool?