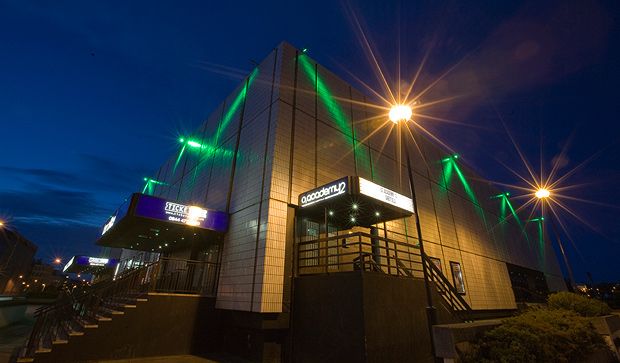 The O2 Academy Sheffield was once a city landmark: Roxy's nightclub, site of many a student night out and a long-term venue for the 80s TV show The Hit Man and Her. After teetering on the brink of demolition for years, it was acquired by Academy Music Group in 2007 and now has a small venue in addition to its 2350-capacity auditorium.

Sheffield station is a few minutes' walk away, on the other side of Sheaf Street. Sheffield Coach Station is on adjacent Pond Street, and the venue is located on top of a multi-storey car park.

There are 50 events at this location

It’s been a whirlwind few years for Aitch now 22, from first blowing up with "Straight Rhymez" at 18 years old to the cover of The Face Magazine. In that short time, he’s had six top 10 smashes, a string of brilliant collaborations including Stormzy, Young T & Bugsey, Ed Sheeran worldwide hit "Take Me Back To London…

Aston Merrygold shot to fame in 2008 as part of the four-piece boyband JLS who finished second place on the fifth series of The X Factor. The group signed a record deal off the back of their successful run on the show and went on to release four studio albums, release their own film JLS: Eyes Wide Open, and win BRIT and…

Teenage rapping duo who reached the semi finals of Britain's Got Talent after Simon Cowell pressed a special golden buzzer.

British multi-vocalist, musician and comedian from London renowned for his beatboxing skills and use of live looping.

In many ways, Black Flag was the definitive Los Angeles hardcore punk band. Although their music flirted with heavy metal and experimental noise and jazz more than that of most hardcore bands, they defined the image and the aesthetic. Through their ceaseless touring, the band cultivated the American underground punk…

A massive night of the biggest emo anthems of the 00's. Expect to hear: AFI / Alexisonfire / Alkaline Trio / All American Rejects / Brand New / Cute Is What We Aim For / Dashboard Confessional / Fall Out Boy / Finch / Funeral For A Friend / Hawthorne Heights / Jimmy Eat World / Mayday Parade / My Chemical Romance / Panic!

Bulsara and His Queenies: Queen Tribute

The four-piece band play rock and pop hits made famous by the group fronted by Freddie Mercury with Gareth Taylor as the iconic vocalist.

Introspective Californian roots rockers with a string of high-profile hits including Mr Jones and Accidentally In Love It’s easy to see Counting Crows as a band out of time. While their neighbours to the north spent the early 90s backing their angst and disillusionment with monolithic distortion, the Californians instead…

Liverpudlian four-piece Crawlers have had a whirlwind 12 months. The alt-rock band have become synonymous with an eclectic brand of music combining grunge, rock, pop and indie into a sound packed full of attitude and socially conscious lyricism. An attitude that has seen the band explode on social media, recent single…

DICK AND DOM IN DA BUNGALOW LIVE   20TH ANNIVERSARY TOUR 20 years after the hit BBC show ‘Da Bungalow’ first burst on to our screens, quadruple Bafta award winners Dick & Dom are bringing their own special kind of mayhem live to Ipswich Regent Theatre! Fun for all ages and packed with chaos and familiar favourites…

Tribute to Jim Morrison's seminal LA rock crew. Expect renditions of classic hits such as 'Light My Fire', 'When the Music's Over' and 'Riders on the Storm'. The band recreate the sounds of the 60s using the same instruments that the Doors used in their heyday, including a Gibson G101, the Fender Rhodes Bass and a vintage…

The leading light in intelligent American comedy takes a brutal look at the stupidity of society and politics today in a vicious, no-holds-barred show.

The Duran Duran Experience have been established as the premier Duran Duran tribute band in the UK since 2012 and have performed at a number of pro venues across the country including the prestigious Concord Club (Eastleigh), The Diamond (Mansfield), The Neon (Newport) and The Fleece (Bristol), in addition to full theatre…

The Detroit rockers invite you to join the punky disco party as they power though hits Gay Bar and Danger! High Voltage.

Typically laddish indie three-piece from Coventry who just about get away with their lack of originality with brute passion. The guys are off on a final tour, so this is the last chance to see them.

RuPaul's stateside Season 14 Queens sashay their way to the UK The top five finalists of RuPaul’s Drag Race Season 14 are heading to the UK for the very first time in October. Join Angeria, Bosco, Daya Betty, Lady Camden and Willow Pill in their search for RuPaul's Drag Gods, the ultimate prize for a queen as they fight…

Tribute to the up beat emo rock of Fall Out Boy.

The Fillers are the world's first and best tribute to The Killers. Formed in late 2006 in the small town of fabulous Bury St. Edmunds in the UK, where The Killers had their initial success. Having interacted with the Killers themselves at close quarters we've captured an unrivalled sound, look and feel of the Vegas…

The former Million Dead frontman has moved away from his hardcore roots to embrace rabble-rousing folk punk in a New Model Army style.

English punk and folk singer-songwriter who began his career as the vocalist of post-hardcore band Million Dead, then embarked upon a primarily acoustic-based solo career.

You just can't keep a good psychedelic rock band down, and these far-out pioneers have been in the business for eternity.

Watch out, the gang's all back together. Madchester nostalgia reigns as the original line-up of The Happy Mondays returns.

Maet LIVE (formerly Maet Loaf) & The Never Neverland Express were formed over 12 years ago shortly after lead singer, Dead ringer for Meat Loaf Craig Halford appeared on ITV’s Stars in Their Eyes, as well as Channel 4's 'The Last Leg' Since then the band has gone from strength to strength, headlining festivals and top…

Nirvana tribute band based in the West Midlands. The band strive to be as close to the real deal as possible with the same clothes, instruments, effect boxes, drums and pre amps that the band used.

Pop Will Eat Itself

Punk-rock with reggae influences by the veteran band originally formed in London in 1977 but now re-formed with some original members. With support from Evil Blizzard, Blackbombers.

Heavy metal heroes Skid Row have been one of the biggest hitting bands over the decades, They continue to blow audiences away at each outstanding show. The infamous band includes drummer Rob Hammersmith, guitarists Dave ‘The Snake; Sabo and Scotti Hill, vocalist ZP Theart with Rachel Bolan on bass. They smashed their way…

West Lothian quartet with a penchant for sing-along indie numbers.

Sunset Rollercoaster is a 6-piece synth-pop band from Taiwan. The band is known for their 80s style of breezy and chilled out music with incredible live performances. The band's debut album Bossa Nova was self-released in 2011, with immediate critical acclaim. The band's latest full-length album Cassa Nova was released in…

The Sweet, King King, When Rivers Meet, The Damn Truth

The sound of the future as imagined in the 1980s. The nostalgic theme song to your favourite childhood cartoon that may have never existed. The hopefulness of someone from the future describing the utopia of tomorrow. Like a paradox of time travel, TWRP is all of these things and yet none of them. This optimistic…

Californian rock band formed back in '87. Best known for bratty hit 'Everything About You'.

Looking for events in Sheffield?