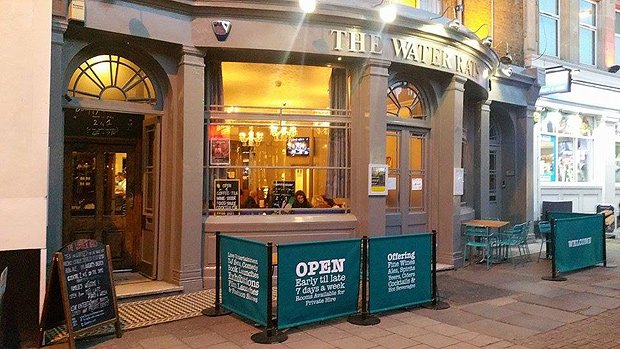 Legendary London music venue, now under new ownership, which has a prestigious history including Bob Dylan's first UK gig in 1962, The Pogues first gig in 1982 and Oasis' first London gig in 1994. Located in the centre of Kings Cross, the venue still provides top quality music as well as a wide selection of drinks and food.

There are 19 events at this location

Join us to celebrate our 59th Birthday. A Variety evening filled with great music and laughter. Hosted by Colin Simmons.

A Songs of Preys Music Production of legendary 80's Post-Punk/goth band Ausgang returning to the stage at The Water Rats in London. Support from Healthy Junkies and The Go-Go Cult

David Devant And His Spirit Wife

A welcome return of the brilliant David Devant and his Spirit Wife, to the Water Rats. All the more exciting given how overdue it is, their last visit, for Christmas 2019, having completely sold out and darn near taken the roof off the place. This will be very special.

Black Cat Music and the Dreaming Spires present THE DREAMING SPIRES celebrate the 10th anniversary of their debut album BROTHERS IN BROOKLYN Originally released by Clubhouse Records in June 2012 The band will play the album in full as well as other favourites Original press comment on Brothers in Brooklyn: "… the most…

Electric Dreams is a regular club night playing the best music from the eighties new romantic and new wave eras, as well as some recent electronica. The club night has always attracted a diverse crowd. All are united though a love of the synthesized sounds of bands like Depeche Mode, The Human League, Duran Duran, OMD…

Ellie M "not Good Enough For You" *single Launch*

ELLIE M: (single launch party) Following the release of her acclaimed series of singles – ‘Out Of The Blue’, ‘R.O.C.D’ and ‘Feel It All’, Ellie M has been in the studio recording her debut EP (out November 18th). To celebrate the release of the first single taken from this EP - 'Not Good Enough For You" (out June 17th)…

An evening with Scott St Martyn

Dean Caston in conversation with Scott about his career in musical theatre. Shows include The Rocky Horror Show, West Side Story and the London palladium production of La Cage Aux Folles. An evening of theatrical stories not to be missed.

Come and share the excitement of FRANSIS' Debut EP 'Honeymoon' which will be released on the day! Be the first to hear the full EP live, exclusive unheard new material and much more… This is going to be an awesome night of live music to celebrate with ongoing supporters and new fans to come. A lot of love went into this…

Pennyblackmusic will be presenting our first Bands Night in two and a half years at The Water Rats in London on Saturday 10th September 2022. Tickets for this cost £8 in advance and £10 on the door. HEIST It has been eighteen years since Heist played their last gig in their then home city of London at a show in support of…

September 2022 sees the launch of Gracious Wings, the 8th solo studio album by Jackie Oates. Jackie has once again been working with producer and sound engineer Richard Evans in Bath, to produce an 11 piece album of traditional English folk songs, self-penned material and the odd unexpected cover version! The album…

Joan Turner - The Voice of an Angel, the Wit of the Devil

An evening remembering and celebrating the life of Joan Turner featuring archive footage and interviews with family and friends that knew Joan.

Midlands based Singer/Songwriter Kezia Gill, has been singing professionally for over 15 years. Born in Nottingham to a large musical family of Irish decent, her early years were spent surrounded by music. Her father, a professional musician for over 50 years and her single biggest influence, introduced Kezia to the world…

A David Bowie tribute band hailing from Nottingham who have fast built a reputation for great live performances of Bowie's wonderful music.

In 1986 Sam Baker was on a train in Peru that was bombed by Shining Path Guerillas. Miraculously he survived and went on to become a great songwriter and is fast becoming one of the biggest underground Americana success stories of recent years. Imagine Steve Earle, Shane MacGowan and Johnny Cash jamming in a back street…

Philip "Swill" Odgers returns to the Water Rats, this time without social distancing to contend with. So lets have a bit of a party shall we With his latest, and already massively loved album Ghosts of Rock and Roll set for a Record Store Day vinyl release, a book due out and a hatful of new songs ready for the next Men…

An evening remembering The Tiller Girls. Interviews and archive footage.