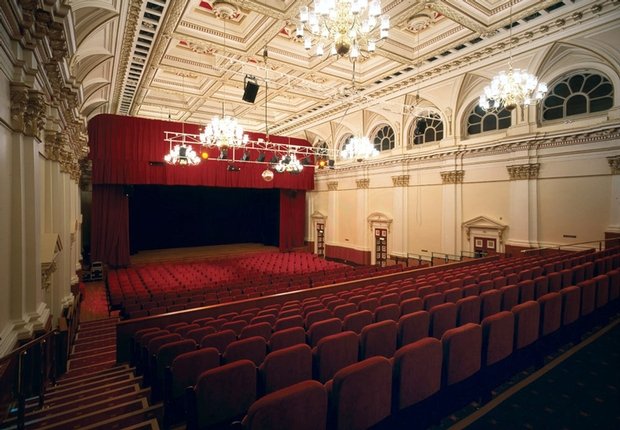 There are 31 events at this location

All Singing All Swinging

This concert spectacular celebrates the fabulous music and tells the incredible story of the world-famous Rat Pack. Led by a bona fide star of swing music, ‘Ray Quinn’. Ray’s debut album, ‘My Way’, features songs from this golden era of music and entered the UK album chart at number one. It sold 127,000 copies in its…

It’s time to let your hair down and celebrate the Festive Season with us at the Albert Halls Bolton. For a night you’ll never forget, Christmas Boogie Bingo is a modern-day Bingo party event. It’s high energy, modern and very interactive including jam packed live entertainment delivered by fun and professional hosts with…

"The show that defines a decade" A New Romantic Symphony that goes on a journey through one of the greatest musical Era's of All Time - The Electrifying '80s. Featuring songs from legendary artists such as Duran Duran, Spandau Ballet, The Human League, Ultravox, Tears for Fears, Depeche Mode, OMD, Japan, ABC, Soft Cell…

Christmas Party Nights return to the Albert Halls, featuring Bolton singing duo Vogue with DJ and a hot buffet supper. Get your friends, family and work colleagues together and let's make Christmas 2022 the best one yet - we deserve it!

The country’s two biggest psychic medium stalwarts battle it out on the celestial canvas to see who is the greatest. At last, the verbal joust the ‘spirits’ have been dying to see….literally. As featured in Peter Kay’s Phoenix Nights…it’s Clinton Baptiste and his arch psychic enemy from Clinton’s massively popular…

Legendary actor, host and broadcaster Craig Charles is one of UK’s most beloved Funk and Soul DJs. From Robot Wars to Red Dwarf, Craig has now grounded himself as a Funk & Soul icon after 10 years of broadcasting on BBC 6 Music with their primetime Saturday night show.

Packed with personality and humour, Crooners brings your much-loved Big Band hits to the stage with a brand new show chock full of hilarious one liners, laugh out loud silliness and a splendiferous injection of Big Band swing as they weave their way through an impressive back catalogue of hits including Come Fly With Me…

Surely The Greatest Prehistoric Show on Earth! 65 million years in the making… Are you ready for the adventure? Join our intrepid Dinosaur Adventurers as we journey to a world of living, breathing, life-like Dinosaurs. Walk with us through the Jurassic era on an unforgettable interactive experience as we introduce you to…

An Evening of Burlesque

Forbidden Nights is made up of a male vocalist, aerial artist, pole performer and fire act all with an element of strip tease – think Cirque du Soleil meets Magic Mike.

In Concert, in addition to Big Band numbers, there are solos spots from a number of our top notch musicians and fabulous renditions from our Star vocalists. ​ From playing under the wing of a Bomber at the American Air Museum to selling out their The Moonlight Serenade Orchestra musicians have credits ranging from 1920’s…

Jack and the Beanstalk

Polka Dot Pantomimes return to the Albert Halls for this years spellbinding festive family pantomime - Jack and the Beanstalk (cast to be announced). The show features spectacular scenery, glittering costumes, amazing special effects and plenty of audience participation! This is family pantomime at its best and is…

Comedy folk band from St Helens on their 50 Shades of Gravy tour.

Lost In Music – One Night At The Disco

Get ready to recreate the Magical 70's and let us take you on a musical journey straight to the heart of Disco! Relive some of the greatest songs of all time from Artists such as Donna Summer, Gloria Gaynor, Earth, Wind & Fire, Sister Sledge and Chic. This show boasts a sensational live band, incredibly talented cast…

The Magic of Motown

Music fans are invited to the biggest party of the year as the unstoppable Magic of Motown show steams into town! Seen by over a million people, it’s no surprise that the show is one of the biggest success stories in British theatre history, even performing for Her Majesty the Queen, as special guests at the Royal Variety…

You've never seen me like this before. You've never been this close. I'm inviting you to spend an intimate evening with me - think of it as coming back to my place for a night of stories and songs. Pellow Talk is a chance to learn all about me, not just as a singer and songwriter with Wet Wet Wet, but as a boy and a man.

Martin Kemp: Back to the 80s

Martin Kemp of Spandau Ballet trades in his bass for the turntables to spin classic hits from the 1980s.

Adult Panto is back! Now in its 5th year, and we are delighted to welcome back to the Albert Halls Bolton.  Liam Mellor & Hot Rock Productions with Mother Goose… Cracks one off. Starring Adult Pantomime legends, the #cracking Liam Mellor as Billy Goose, and the fabulously filthy Jimmy Burton-Iles in the title role of…

Oh! What a Night

Oh What a Night! takes you back in time on a musical journey through the incredible career of Frankie Valli & The Four Seasons, now immortalised in the multi-award winning show Jersey Boys, which has been packing theatres worldwide since its debut in 2005. Valli’s unmistakable voice dominated the airwaves for more…

One Night In Dublin

Come and join in the craic as this award winning seven piece Irish band covers songs by the Pogues, The Dubliners, The saw doctors, Daniel O’ Donnel, Flogging Molly, Drop-kick Murphys, Van Morrison and many more, in their own unique and upbeat style. The Wild Murphys celebrate Irish classics with tracks including: Galway…

Laugh 'til you're red in the face! “The Hypnotist: Red Raw” is a brand new show where volunteers from the audience unlock their imaginations and create a once-in-a-lifetime show of improvised comedy under the influence of hypnosis - live on stage. Robert Temple is back on tour after a phenomenal 23-day run at the…

Barry Steele and a fabulous cast of musicians and singers will take you on the continuing musical journey from The Black and White Night right through to the Traveling Wilburys and beyond - with so much more in between. They promise they’ll have you dancing in those aisles, in an evening packed with Rock and Soul.

The traditional fairy tale is brought to life by Russian National Ballet.

Swan Lake – The greatest of all romantic ballets Music by Pyotr I. Tchaikovsky After the sell-out performances of Nutcracker last year, Russian National Ballet returns to the UK with the most famous Ballet of all time. Swan Lake is one of Tchaikovsky’s best works, featuring some of ballet’s most memorable music and…

‘The Greatest Rock & Roll Band In The World’ is a bold statement but Showaddywaddy has lived up to that title for the last 4 decades! Formed in the 1970s in Leicester from several local bands, they have sold more than 20 million records and have toured all corners of the World extensively. Their live show is dynamic…

Twopence To Cross The Mersey

The UK's Premiere tour of Helen Forrester's Twopence to Cross the Mersey - a brand new stage production not to be missed! Adapted by Rob Fennah - directed by Gareth Tudor Price. Star studded cast from stage and screen to be announced soon. Adapted from Helen Forrester's million-selling autobiography, Twopence To Cross The…

The world famous Elvis Show starring Chris Connor and The Steels With his 12 piece band Chris Connor is guaranteed to thrill all Elvis fans. A show with the highest respect and quality created and produced by Elvis fans for Elvis fans. If you appreciate authenticity and respect for Elvis, then this show is for you! Seeing…

Looking for events in Bolton?