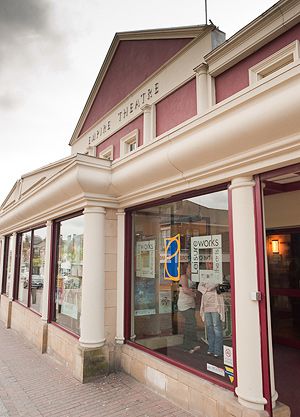 The Empire Theatre & Cinema is a popular 500 capacity venue in the heart of Consett, screening live theatre shows ranging from comedy and children's plays, to classical ballets and live music.

The cinema now screens the latest blockbusters and 3D movies, with a new state-of-the-art digital projector. The Cafe Bar also offers a place to unwind, with a superb range of beverages, cakes, pastries and more.

There are 29 events at this location

Empire’s smash hit pantomime returns with Leah Bell and full supporting cast to present the magical tale of Aladdin! Packed full of magic, dazzling costumes, all your favourite characters and lots of adventure, our 2022 panto brings a modern twist to the traditional story. Let the adventure begin! School tickets £9.

A selection of the best-loved songs from new and classic West End shows like The Phantom of the Opera, Mamma Mia, The Lion King and Les Miserables.

The Chicago Blues Brothers: Night At The Movies

Presenting the UK premiere of this ballet company from Moldova. Every child’s favourite fairy-tale, Sleeping Beauty is the classic story of love and innocence, mystery and magic set to Tchaikovsky’s sublime score. Stunning choreography, sumptuous costumes and wonderful sets form the fantasy world in which the Lilac Fairy…

Presenting the UK premiere of this ballet company from Moldova. Swan Lake is the compelling legend of a tragic romance in which Princess Odette is turned into a swan by an evil curse. Prince Siegfried chances upon a flock of swans while out hunting. When one of the swans turns into a beautiful young woman he is instantly…

Surely The Greatest Prehistoric Show on Earth! 65 million years in the making… Are you ready for the adventure? Join our intrepid Dinosaur Adventurers as we journey to a world of living, breathing, life-like Dinosaurs. Walk with us through the Jurassic era on an unforgettable interactive experience as we introduce you to…

Let’s dance, let’s shout, come and shake your body down to The Empire Theatre with the electrifying show that screams glitter balls and good times all the way… If you ever dreamed of going to New York’s Studio 54, Disco Inferno takes you there – in an all-singing, all-dancing celebration of everything D.I.S.C.O. Featuring…

A look at the life of the legendary rock and roll star, Elvis Presley.

The Elvis Years: The Story Of The King is an outstanding musical production which brings to the stage the incredible and compelling story of the ‘King of Rock & Roll’ – Elvis Presley. Join Mario Kombou (Jailhouse Rock, West End), an all-star band and award-winning singers for an unforgettable journey through over 50…

Good Luck to You, Leo Grande

Unfulfilled widow Nancy Stokes hires a male sex worker in the hope of enjoying a night of pleasure and self-discovery.

Celebrating over 50 years since the formation of the legendary West Coast Country Rock band The Eagles in 1971, The Illegal Eagles make a welcome return to Consett with a brand new production, promising more of their trademark musical prowess, acute attention to detail and incredible showmanship. This critically acclaimed…

The four-piece from Kilkenny plays Irish folk and ballads.

Minions: The Rise of Gru

Sequel to the Despicable Me spin-off.

This year saw science lead the way in getting our lives back to normal. Now, the UK’s favourite science team are back and more explosive than ever! Join our presenters as they dive deep into the world of science and look at how science shapes the modern world we live in with a few loud bangs along the way. They’ll take an…

One Night In Texas

Nashville may be the home of country music, but everything is BIGGER in Texas! This is one of the biggest country music shows in Europe, featuring an all-live band. Country music is one of the most popular genres of music in the world and it encompasses many styles from Roots, Bluegrass and Americana, through the classic…

From Billy Elliott to Auf Wiedersehen Pet. From *When the Boat Comes In *to *The Likely Lads *- be enthralled and entertained in a night of songs and stories laced with North East humour and humanity. The Pitmen Poets is Lindisfarne singer and songwriter Billy Mitchell, Warhorse songman Bob Fox, Master of Tyneside…

The traditional fairy tale is brought to life by Russian National Ballet.

Swan Lake – The greatest of all romantic ballets Music by Pyotr I. Tchaikovsky After the sell-out performances of Nutcracker last year, Russian National Ballet returns to the UK with the most famous Ballet of all time. Swan Lake is one of Tchaikovsky’s best works, featuring some of ballet’s most memorable music and…

With a brand-new production for 2022. Join us for the musical phenomenon of 2022 with this festival of nostalgia. The show with the definite feelgood factor will transport you back to that magical decade that was the 1960s. Whether you come to relive your childhood memories or you just simply want to see what your parents…

The Sound of Springsteen

Celebrate the best of ‘The Boss’ with classic songs from the Springsteen songbook including: Born to Run, Streets of Philadelphia, Badlands, Born In The USA, The River, Dancing In The Dark, Human Touch, Thunder Road and many more. Travelling up and down the UK and performing live on stage to great acclaim, the band’s…

The stage is set for the greatest talent show ever! For the first time together, we will see amazing musical performances from your favourite TV Stars, live on stage! Ben and Holly will sing some of their favourite songs with help from the magical Nanny Plum. The PJ Masks heroes, fresh from a new adventure, will show the…

The long-running trio of female vocalists from Philadelphia perform live.

THE ULTIMATE CELEBRATION OF THE WORLDS GREATEST FEMALE ANTHEMS Since 2016, Women In Rock have been wowing audiences across the UK & Europe with theirhigh energy performances. Featuring soaring vocals, choreography, audience interaction,striking costumes and backed by a band of world class musicians, Women In Rock has…

Looking for events in Consett?