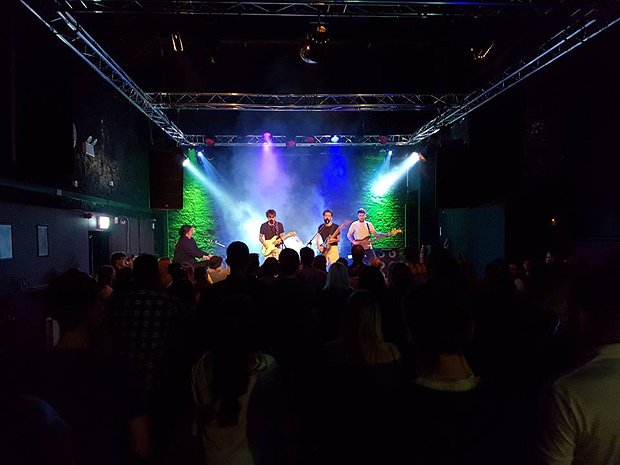 A 300-capacity venue managed and programmed by not-for-profit organisation Tees Music Alliance. Playing host to a variety of musicians, both local and touring, the Georgian Theatre is Stockton-on-Tees' longest-running music venue.

There are 17 events at this location

Four-piece indie band from the Isle of Wight.

Foo fighters GB are a midlands based tribute band who’s goal is to provide a true-to-life reconstruction of a real Foo Fighters performance at any and every show. They pride themselves in bringing the true, authentic Foo Fighters experience to you. Over the past 6 years and a few line up changes, the sound that Foo…

The band performs classic soft-rock hits in tribute to the Phil Collins' era of the group.

Teenagehood, brotherhood and a love for an array of alternative music has united Burnley’s The Goa Express. The intensity of the friendship has resulted in the occasional bust up along the way, yet it only add to the burning chemistry which the band offer on record and on stage. Together, James Douglas Clarke (Guitar…

The Jam'd: The Jam Tribute

Widely regarded as the UK’s most authentic and leading tribute to The Jam, and with their own brass section, The Jam’d are entirely committed to providing audiences with a memorable and authentic performance with all the energy, passion and style you could dream of. As full time touring professional musicians, and massive…

Unapologetically rooted in the 60s but infused with a boundless youthful energy, The Mentulls are a melodic rock blues band with influences of 70s progressive rock, blues, classical, folk and pop.

Approved by all members of the Sex Pistols, the 'Sex Pistols Exposé' are the worlds number 1 tribute which brings high expectancy where ever they perform, Branding the well known clobber with Johnny Rotten's snarling persona and Sid Vicious's gimmick, It will bring back the highly loved spirit of 77'. With 2000+ shows…

Evening of stand-up and improvised comedy.

The influential Dunfermline art punk rockers have been in the game over 40 years now. AGMP presents The Skids 'Unplugged' in support of their recent acoustic album 'Peaceful Times'

Scottish indie rock for fans of Frightened Rabbit, Idlewild and The National.

Looking for events in Stockton-on-Tees?