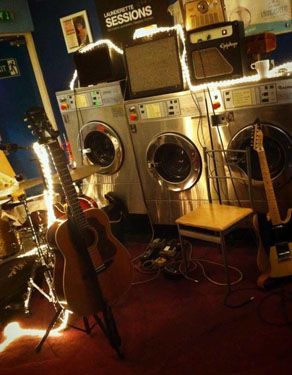 A retro launderette based in an old cinema, the Old Cinema Launderette also functions as a music venue for intimate gigs.

There are 7 events at this location

Admired pop/blues songsmith – founder of cult band The Bible and frequent collaborator with Eddi Reader, Paul Young and Natalie Imbruglia. Boo has released many albums as a solo performer and has made hit songs over the past two decades.

Mix of seating and standing. Arrive for doors at 7pm to ensure a seat. Good disabled access and toilet. Music from around 7.45pm. About Jez A double nomination in the 2015 BBC Folk Awards for best singer and best new song was a timely reminder of Jez Lowe's standing in the UK folk and acoustic music scene. Not only he is…

Now resident in Scotland, the respected Geordie songwriter performs with his band The Daintees.

The NE Street Band are a 6 piece playing group of local musicians performing the songs of Bruce Springsteen. The band have have quite a following with great reviews from their live shows and usually perform in larger style venues & theatres around the North East & further afield in the North of the UK. However we…

Venue is a mix of seating and standing Gary Stewart is a singer/songwriter from Perthshire who cut his teeth performing on the Leeds music scene for 15 years before moving to York where he currently resides. Stewart writes songs in the Folk/Pop vein and is influenced by the Folk Artists of the '60's and '70's. The…

TV Smith was founder member, singer and songwriter for the Adverts, who formed in late 1976, and became one of the leading bands in the first wave of British punk rock. In early 1977, they performed regularly at the newly-opened Roxy Club in London, and gained cult success with the Stiff Records single "One Chord…

Looking for events in Durham?