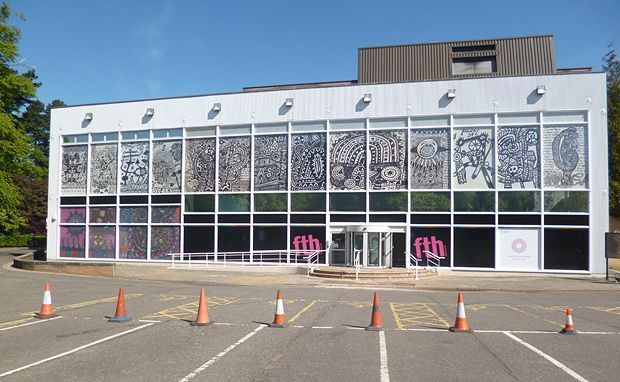 This multi-purpose arts, cinema and conference venue is situated in the heart of Falkirk.

Opened in the late 1960s, it is one of central Scotland's busiest and most popular arts and entertainment venues, with a varied programme including international music, theatre, dance, film, comedy and family events.

Grahamston Station is 5 minutes walk away, Falkirk High is 15 minutes.

On site there are disabled parking bays, accessible toilets, induction loop, and wheelchair and carer spaces on the theatre's front row.

There are 29 events at this location

Jonathan Ansell (G4 Frontman) and Jai McDowall (Britains Got Talent - Winner) have joined forces to create a dramatic and spine-tingling concert. This vocally dynamic evening showcases even more smash-hit songs from the greatest musicals of all time, brought to you by two of the world's finest voices. Come and immerse…

Join Falkirk legend and panto superstar Barbara Bryceland in this evening of music, laughter and song. Barbara will be joined with some of the best talent around to get the theatre jumping and in the party mood. The star of ITV’s ‘THE VOICE’ is known for her incredible vocals and infectious personality which will ensure…

On February 9th 1961, The Beatles made the first of their 292 appearances at the now legendary Cavern Club in Mathew Street, Liverpool. 50 years on, The Cavern Beatles, a band fully endorsed and licensed by the same club will be coming to a venue near you with their remarkable show. The show is a Magical History Tour…

Come What May: The Ultimate Moulin Rouge Tribute

A tribute to Baz Luhrmann's glittering musical about the ill-fated romance between a writer and a cabaret actress.

Cutting Edge Theatre Elizabeth has Downs. She lives a very independent life with help from her support worker, Tracy. Elizabeth has fallen for a guy, but the trouble is, he has fallen for Tracy. A challenging look at love and how society views relationships. Devised and written by the company. Based on real life…

This will be a one and a half hour drama workshop led by the Director of ‘Downs with Love’ This will be a fun session for people with disabilities to take part in some drama games and exercises and is open to anyone with a ticket for the evening show. Carers are welcome.

Fastlove: A Tribute to George Michael

An affectionate celebration of the life and music of George Michael including his early days with Wham!.

When all of his friends go away, Norman Price decides to find adventure in Pontypandy and become the star of a visiting circus. But with a tiger on the loose and faulty lights, the adventure soon turns to danger. Can Fireman Sam come to the rescue and save the circus? Join Sam, Penny, Elvis, Station Officer Steele and…

Forbidden Nights is made up of a male vocalist, aerial artist, pole performer and fire act all with an element of strip tease – think Cirque du Soleil meets Magic Mike.

City boy Ren thinks life is bad enough when he’s forced to move to a rural backwater in America. But his world comes to a standstill when he arrives at Bomont to find dancing and rock music are banned. Taking matters into his own hands, soon Ren has all hell breaking loose and the whole town on its feet. Based on the…

Age 18 plus Frontier is Gary’s journey into the unknown, will we find aliens on mars? Can I get Turkey teeth? Will I ever call my Mum’s boyfriend Da? Can I do yoga without farting? Will the yoga lassie let me back after fart gate? An action-packed hour of relatable comedy from Gary who just wants to be a better version of…

Most blurbs are written in the 3rd person so they’ll be like ‘Gary is this, Gary is that, you can expect this from Gary’ well I’m writing this myself so, this will be MY 3rd show, or 2.5 as I’m calling it. I’ve had several top professionals and industry people tell me over the years that I shouldn’t swear as much on…

Sequel to smash hit I Will Survive – a night out for the girls with a retro soundtrack.

The world's greatest celebration of the life and work of Neil Diamond… evocative imagery, video and narration enhance the magic, as the show takes you on a musical journey through Neil Diamond’s glittering 50 year career. From The Bang Years to the present day you’ll soon be singing along to all the hits including 'Sweet…

Jim Smith: The Hills Have Ayes

Jim Smith, The Stand Comedy Club, Scottish Comedy Agency After his last sell-out tour, Perthshire farmer and comedian Jim Smith returns with a brand-new show telling tales of Scottish rural life. With his trademark mix of regional accents and impressions, Jim shares anecdotes from his changing world which has seen him get…

After rave reviews from her 2019 Scottish Tour of ‘My Big, Fat, Fabulous Diary’ and fresh from The Edinburgh Fringe 2022, The ‘wee powerhouse’ from Glasgow is back! Round up your favourite people; partner, parents, friends, your wee Auntie Margaret, Davie from the bowling club, bin the belt, put on your comfiest outfit…

Lulu – For The Record

Lulu has made music and memories with the greatest of all time. Elton John wrote songs with her, Bowie produced and recorded with her, McCartney duetted with her and one of the Bee Gees married her. It’s a story that has to be told and provides a once-in-a-lifetime insight into some of the world’s musical legends. Join…

Milkshake Monkey is back and can’t wait to put on a spectacular NEW Show for you all, joined by some of his favourite Milkshake friends plus two Milkshake Presenters creating the most dazzling show you have ever seen! Join Paddington, Daisy & Ollie, Milo, Noddy, Pip and Posy, Blue’s Clues & You! and of course…

Oh! What a Night

Oh What a Night! takes you back in time on a musical journey through the incredible career of Frankie Valli & The Four Seasons, now immortalised in the multi-award winning show Jersey Boys, which has been packing theatres worldwide since its debut in 2005. Valli’s unmistakable voice dominated the airwaves for more…

Paul Young – Behind the Lens

Paul Young - Behind the Lens He's been a major star for four decades.  Paul Young broke into the big time 40 years ago when "No Parlez" went to number one and spawned iconic hits like "Wherever I Lay my Hat (That's my Home.)"  More success followed with the number one album "The Secret of Association" and the worldwide…

Broadway's timeless classic musical whisks you away to a place where dreams are born and no one ever grows up! Featuring the iconic songs, "I'm Flying," "I've Gotta Crow," "I Won't Grow Up" and "Never Never Land," and a rousing book full of magic, warmth and adventure, Peter Pan JR. is the perfect show for the child in…

Come and join us for the magical family friendly pantomime Sleeping Beauty at FTH Theatre this Christmas. When the wicked fairy Carabosse’s evil curse causes the princess to prick her finger on a spinning wheel and fall into an enchanted sleep can anyone rescue her from the magical slumber before it is too late? Sleeping…

Snooker Greats – Clash of the Titans

Stephen Hendry V Steve Davis Seven-times World Snooker Champion Stephen Hendry takes on his arch rival Steve Davis six times world snooker champion in a “one night only” clash of the world’s greatest snooker players the game has even seen! Come and join the UK’s favourite snooker stars as they recreate the matches that…

Mairi has her dream job running the ‘I Do’ wedding agency, planning that special day for brides to be all over the country, but it’s not all plain sailing – she has to deal with Bridezillas, wild Hen Nights and making sure there’s always plenty of Prosecco on tap! Mairi is also fed up being single; she can’t wait to find…

Looking for events in Falkirk?